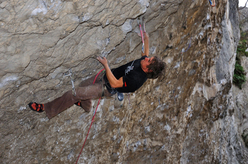 Lukasz Dudek has repeated Martin Krpan 9a at Misja Pec close to the village Osp in Slovenia.

Lukasz Dudek, one of Poland's strongest sport climbers, has recently repeated Martin Krpan, the 9a first ascended by Jure Golob at Misja Pec, Slovenia. Apart from the exceptional difficulties, what makes this ascent noteworthy is the fact that this is the first time a Polish climber has climbed these difficulties abroad.

Dorota Dubicka from wspinanie.pl puts the ascent into perspective: "This is an exceptional event in Polish climbing. This is the first time a Polish climber has done a 9a abroad – for years this has been the dream of the best Polish climbers! Thanks to this achievement Lukasz has significantly narrowed the distance to the world elite. The systematic increase of Lukasz’s level and ease with which he led the route show that this is only the first step in his adventure with the 9th grade.

Martin Krpan is a combination of two lines: Strelovod 8c and Konec Mira 8c/c+. The latter one Lukasz led at the end of January 2009. The success is especially impressive due to the fact that it was achieved really fast – after only six days of attempts. As Lukasz remarked: “An easy stroll, I felt in control.” Also perfect conditions facilitated the effort – dry weather and 10°C.

It’s hard to imagine a better start to the 2009 season for Lukasz. Apart from the Slovenian classics Martin Krpan 9a and Konec Mira 8c/c+, in January 2009 Lukasz also repeated Alien Carnage 8c+ in the French area Castillon and two 8c's in Spain, Atizol in Margalef and Pintoretta in Sella. Up to now Lukasza's score starts with the following list list: 4x 8c+ ,10x 8c and 1x 9a."