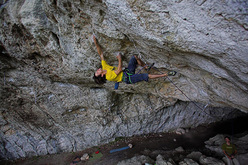 Luka Zazvonil during the first ascent of Miza za šest, or Table for Six 8c+/9a at Kotečnik in Slovenia.
Photo by Urban Golob 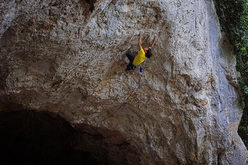 Luka Zazvonil during the first ascent of Miza za šest, or Table for Six 8c+/9a at Kotečnik in Slovenia.
Photo by Urban Golob

Luka Zazvonil prepares Table For Six at Kotecnik in Slovenia

Slovenian climber Luka Zazvonil has made the first ascent of Miza za šest or Table for Six 8c+/9a at Kotecnik in Slovenia. Urban Golob provides the report.

Slovenia has now got another hard sport climb. The route is not in Mišja peč or Osp as you might think, but it is located in eastern part of Slovenia, at a crag called Kotečnik close to Celje, the third largest Slovenian city. Miza za šest or Table for Six is the latest addition to other 240 routes at this popular Slovenian crag.

The route was first ascended by Luka Zazvonil and he is a veteran of the hardest sector in Kotečnik called 'Oboki', a very big, steep cave bolted by Luka back in 2003. At the time he managed to send every project except one and soon afterwards he married, became father of three and obviously did not have much time for hard climbing.

In 2009 he decided to climb this project and he came close to doing it that year, but success finally came about at the beginning of May 2011 when conditions were optimal, his head was free of worries and the desire to succeed immense. "It was more a mind game than anything else", says Luka after he had fallen off the last small holds, just a meter below the top, 25 times. He remembers his attempts at the 70-move acrobatic route well: "To make my second and third try of the day - after teaching at school and driving 1.5 hours to reach the crag - I put the gas lamp close to the roof and climbed with head lamp through the dark."

The route is climbable only in dry conditions since the holds get wet after extended periods of rain. After having sent several 8c+ in Mišja peč, Luka believes this to be his hardest climb yet which leads him to conclude that difficulties are somewhere in the region of 8c+, maybe even 9a. "First repeaters will provide the right grade", says Luka who also explained the meaning behind the name of the route Miza za šest, or Table for Six): "I dedicate this route to my family which will get another – sixth - member in October."