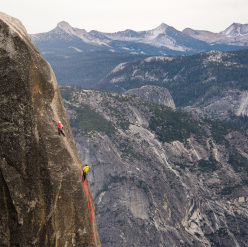 Over a five day period in September 1947 John Salathé and Ax Nelson forged what Yosemite valley historian Steve Roper described as "a true Valley milestone: the first big-wall climb ever done in the United States - and without a doubt the beginning of the Golden Age of Yosemite climbing." The route in question, Lost Arrow Spire Chimney, was the first to breach the Lost Arrow Spire, the magnificent granite tower to the right of the stunning Upper Yosemite Falls.

It was this huge tip that Sasha DiGiulian, at the start of September and during her first visit to the valley, decided to climb by abseiling in from above. Her guide? None other than Kevin Jorgeson, the man who together with Tommy Caldwell made the first free ascent of what is reputed to be the hardest big wall in the world, Dawn Walll on nearby El Capitan. So after sending 9a, repeating difficult multi-pitches from the Alps to the Dolomites and Sardinia, DiGiulian now confesses that during this trip she was "Looking out into the future of everything I want to be be doing."