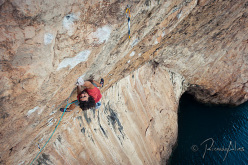 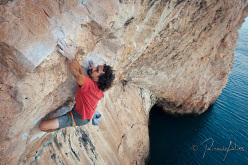 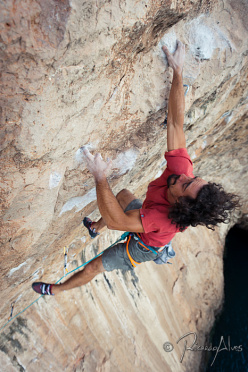 At the sea cliff Sagres Leopoldo Faria has made the first ascent of Peixe Porco, the first 9a sport climb in Portugal.

Located on the South-West tip of the Iberian peninsula, Sagres in Portugal's Algarve region offers a irresistible mix of culture, unspoilt sandy beaches, a mild climate and countless outdoor sports attracting thousands of tourists year in year out. Few know though that Sagres is also the home of a great little sea cliff which, ten days ago and thanks to Leopoldo Faria, shot to fame with Portugal's first ever 9a climb, Peixe Porco. Faria is one the country's most talented all-rounders, with long multi-pitch routes in Spain, Mexico and Pakistan sitting comfortably alongside difficult single sport climbs and his ascent is an important moment not only for Europes south-westernmost countru but it also marks an astounding return to form after a serious wrist injury in 2010.

On Saturday 2 March I finally completed what I had started almost two years ago. It was by far the biggest challenge that I had in climbing and I’m really happy to have succeeded so I can now move on, living no unfinished business behind.

I bolted this line in spring 2011, at a time I was recovering from a serious injury I got while on an expedition to Pakistan in 2010. After many months without climbing and with my wrist still not properly healed, I started to doubt whether I would ever climb hard stuff again. But at the start of 2011 I started climbing again, slowly, and after 3 months I felt I was ready for some serious action. My hand still hurt but my strength had returned and so too had my motivation. So I started looking for a line that represented a next level for me and, at the same time, was inspiring enough for me to invest all my energy and focus.

There is not that much rock in Portugal, especially for hard sports climbing, so if you want to try something harder, you have to bolt it yourself but, first of all, you have to find it! In many ways that’s what's so cool about climbing here, you have to do everything from the ground up.

I thought about where I might find this perfect challenge and Sagres immediately sprung to mind. Not just because it still has some potential for new routes, but also because it’s a truly special place with a beautiful atmosphere. Since I had bolted most of the hard routes there I knew exactly what still remained to be done and although it wasn’t that much, I remembered a route I had bolted years before, “Pop Star” 8b+. At the time I had bolted the bottom section of that route and then, to avoid a blank section, I had decided to link with a route immediately to the right. So without thinking twice I grabbed my drill and drove there, convinced that it held something in store...

I couldn’t have been  more right! I drilled the blank upper section, immediately tried it and after the first session I knew I had found what I was looking for! It was hard to believe how perfect the route is, crazy shapes with almost no holds on it, just sloppy features with a micro two-finger-pocket in the middle. It was hard to figure out all the moves, but one day after the next I began to get more solid.

One of the biggest problems though was something I hadn't contemplated before bolting the line: there is no climbing community in Sagres and the cliff is 300 kilometres from Lisbon, so this odyssey was a large obstacle. Having said that, the biggest challenge all was definitely in my head, at some point I realised that I had everything  I needed to send the route, but for some reason, I just kept falling over and over again... to the point where I start doubting whether I'd ever succeed at all.

After so much failure it’s impossible not to have a feeling of uncertainty and even thoughts about why you’re really doing something. You can’t try something forever, you always have to draw a line somewhere and let go. Realising where it is isn’t easy, because at the end of the day it’s a line that you yourself draw!

On the first Saturday of March I succeeded. It goes without saying that I'm very happy with the feeling of satisfaction and achievement that resulted from this big fight. During this last months I kept saying to myself that I'd never do something like this again, but who knows, this feels so great!