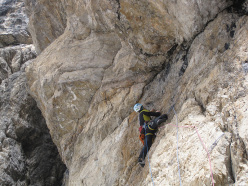 Luca Cornella below the roof of La Guerriera (7b, 290m, summer 2015) on Cima Bassa d'Ambiez, Brenta Dolomites, during the first ascent together with Michel Ghezzi.
Photo by Luca Cornella 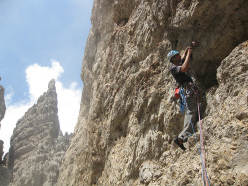 This summer Luca Cornella Michel Ghezzi made the first ascent of La Guerriera, a new multi-pitch rock climb up Cima Bassa d’Ambiez in the Brenta Dolomites.

It seems like only yesterday that while abseiling down Sguardo al Passato we both exclaimed "hey, there might be space for another route here..." No sooner said than done. When summer arrived what could be better than climbing at an altitude of 2700m? We agreed on a date and in June 2015 started up this new adventure.

We one day after the next, the higher we got the more improved, the more we got to know each other, sharing our qualities and defects, talking and singing De Andrè.

Over a 5 day period we established and freed our route called La Guerriera, the warrior. We followed the logic of searching for the easy within the difficult, but also free climbing on quality rock. On pitch 7 we got close to Via Steinkotter, but we soon trended off left so as not to disturb the line and the moods of others with too many pegs or bolts.

We dedicate this route to those who, through her true “warrior” courage, has taught us never to surrender when faced with difficulties in life.