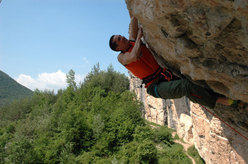 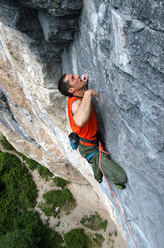 On 31 May Luca Zardini carried out the first repeat of La grande linea dei sogni 8c+/9a, the Erto testpiece first ascended by Adam Ondra in April. With this ascent the Cortina based climber takes home the poker of the four hardest routes at this historic crag.

We last heard from Luca 'Canon' Zardini when he carried out the first ascent of La linea dei Sogni last March. While sending the final moves of that ultra hard 8c+ overhang and slab he identified another top line. In many respects this was a sort of closing of a circle, a super variation which linked the first section of “The big mother” 8c+ (freed by Zardini in 2000) with the difficult and intense slab of the recently freed “La linea dei sogni”.

In his report Luca hinted at a further episode... But as he himself says and everyone knows: "while waiting for the final episode... the ads came on. An ad called Adam Ondra." This incredible climber quickly repeated La linea dei Sogni and then immediately freed this big project, grading it 8c+/9a.

Zardini was happy as "Ondra demonstrated that he really is a martian." Such a statement is indicative of Zardini's sportsmanship:years at the helm of the Italian competition squad demonstrate this clearly!

The Cortina based climber continued with his project and on 31 May - after a dozen attempts spread over 4/5 days in April and May - he finally carried out the first repeat of "his" Great Line of Dreams.

For the record, circa 15 days before the successful climb Zardini fell from the final move of the route, but prohibitive conditions in May stopped further attempts until the final redpoint.

"As far as I'm concerned" explains Zardini "this is definitely one of the hardest routes I've ever climbed together with Grande Onda 8c+/9a which I freed in 2006 at the Volpera crag close to Cortina”. This beautiful route would merit a visit by top climbers, as it still remains unrepeated...

What a great journey... to be repeated (by those who can).