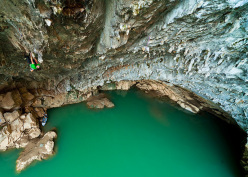 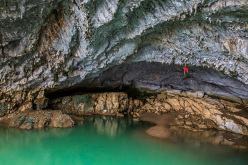 Klemen Becan frees Water World 9a at Osp in Slovenia

At the Ospo cave in Slovenia Klemen Becan has freed Water World 9a.

Last Saturday Klemen Bečan freed his "big project" in the immense cave at Osp, Slovenia. Bolted by him almost two years ago, the route takes a striking line up the lefthand side of the cave for almost 50m and is split into two distinct sections; 30 intense moves lead to a good rest, followed by another 30 easier metres of "super nice climbing on stalactites, 8b."

The first redpoint came about after "lots of attempts, often alone in the cave, trying to figure out the moves by myself for hours." Apart from the difficulties linked to this "3D climbing" has he defines it, Bečan also had to deal with another incognita: how to reach the base of the route, seeing that with the winter rains the cave had filled up with water. After an initial approach (and belay) with a kayak Bečan eventually settled for a Tyrolean traverse and on Saturday he finally freed the line on this third attempt that day. Graded 9a, it is currently the hardest route in this splendid cave that hosts a dozen routes from 8a upwards. The name of the line? Water world. Obviously.