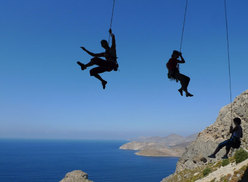 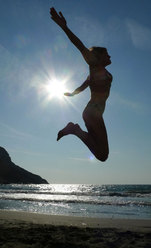 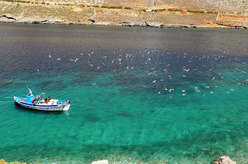 Kalymnos and its sea
Photo by archivio N. Noè 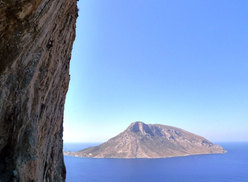 Kalymnos and the four climbing seasons

A journey through the Greek island of Kalymnos, climbing and a lot more, in all seasons. By Nicola Noè.

An oceanic sea. Talking about climbing only is a hard task. Because while for us climbing is the centerpiece, Kalymnos would certainly not be so compelling if you can't enjoy all it has to offer. There are plenty of crags dotted all over the world, some certainly even far better. But to make a trip there really worth it, you have take everything into account: the flight (cheap and easy at last), decent, low-cost accommodation, good, inexpensive food, scooter transport, the local population all excited by this unexpected international attention and relaxed and varied surroundings thanks to people of all age and whereabouts.

When's the best time to go to Kalymnos. In late spring or early autumn? In summer or even in winter? And should you stay in Kantouni or Massouri, or at Emporios far from the madding crowd? How often have the walls of the bars at Sakis and Glaros - the traditional climbers' hangouts - heard these questions followed by antithetical reasons in favour of one or the other. All true, alas. So what should be done? When should you go to Kalymnos?

Along comes winter. Cold winds caress the island, a few more millimetres of rain in November. So you climb at crags you forget about during the warm seasons, those facing south, those above Emporios, the famous Arhi, the distant Galatiani and Iliada and the gigantic Olympic Wall. There are less flights on offer, some restaurants enjoy a well-deserved rest, the sea cools down and this is the exclusive opportunity to climb in an intimate and remote ambient. Ça colle, as the French would say. It's the ideal time of year to battle up those small crimps.

Spring, nature awakens. The limestone slopes are covered in green leaves and grass and a bounty of colourful flowers. On your scooter you're dressed in anorak, gloves and hat, but as you approach the rocks you finally enjoy the warmth of the sun. The paths that lead to the crags are lush, such as the beautiful walk to the breathtaking Ghost Kitchen cliffs. The glimpse onto fjord Arginonda is breathtaking, onto the motley coloured sea, the thin pebble beach, and the highly popular red Katharina crag, with its numerous routes of all grades which weave their way up the cliff and small coves.

Summer. The hot, hot sun. But this isn't felt on a small rocky island, exposed to the brunt of all winds, slap in the middle of the Aegean Sea. That's why loads of climbers - obliged by work commitments or school holidays - come here at this time of year. A morning's climbing is followed by a dip in the ocean while waiting for the cool evening winds. Paradise Beach, Pirate's Beach - the Kalymnos equivalent of Ton Sai, show themselves from their best side during these hot summer nights. The locals from Pothia prefer Kantouni, no sunbeds and umbrellas, with sand, free of charge. The Greek families meet here for a chat, floating motionless in the warm sea.

Autumn. This is the when you fully understand how tourism on Kalymnos has changed, ever since the fortuitous and fortunate arrival of Andrea di Bari in 1997. At the turn of the new millennium bars and restaurants located on the west ocast closed down for winter in September. The few studios at Massouri and Kantouni closed as the sun, sea and sand tourists inevitably migrated elsewhere. The two villages prepared for a long hibernation, from early September to mid-June. All this has changed and now, in the middle of October, Massouri is a colourful and lively town bustling with tourists from all over the world. Carrying ropes and rucksacks, they crowd the streets and linger in shops, bars, restaurants and more. The sea is still warm and proves irresistible after a day's climbing, while the warmth of the last rays of sun falling behind the island of Telendos means that the summer beach beds and umbrellas are still left in place. Even the sparse, dry vegetation reminds me that summer is not over yet. What Massouri offers has increased tenfold during the last decade. The rocky cliffs from Symblegades Petres all the way to The North Cape, via Ourania, Poets, Iannis, Kalydna, Panorama, Grande Grotta, Spartacus and Odyssey, are now the solid foundations for new and even more comfortable studios.

Kalymnos in all seasons, therefore! Kalymnos and the beauty of its dazzling light, a light so bright that it shines within us. For me Kalymnos is a sort of invention, a refuge. Because normal people, those who work day in day out, who have a family, who aren't bored by climbing, don't need to seach for the extraordinary, they simply want to have fun and enjoy themselves. It is, I suppose, a little big dream, nothing but a simple dream.


Kalymnos. 5 things not to miss out on
1 – The relaxed atmosphere, found both in the lifestyle and climbing
2 – The quality and sheer quantity of rock
3 – The Beautiful, well-bolted routes, even easy and mid-grades
4 – The Pirates beach and the scooter raids
5 – The sunset over Telendos