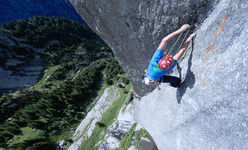 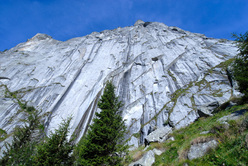 On 12 and 13 October 2011 James Pearson made the coveted second ascent of Joy Division (800m, 8b) on the Qualido, Val di Mello, Italy, one of the hardest granite multi-pitches in Europe.

With the main difficulties concentrated in the lower section, Joy Division offers sustained, delicate and complicated climbing throughout its 800m. In fact, as Pearson admits, he had initially "completely underestimated" the route but after working the line for 15 days spread out over a period of three months he finally came up trumps together with Frenchman Nico Nastorg. For the record, Pearson led the entire route in single push, without ever falling and a bivvy at circa half-height.

Joy Division was first ascended by local climber Simone Pedeferri and is a combination of three routes, the first three pitchs of Forse si, forse no (Igor Koller, Peter Machai, Miro Piala, 1996) followed by Mellodramma (Gianni & Paolo Covelli, Silvio Fieschi, Fabio Spatola, 1989) up to the 15th pitch to then finish up Melat (Sonja Brambati, Adriano Carnati e Paolo Vitali, 1993). Pedeferri climbed the line over three different days in summer 2004: the first three pitches one evening in July, up to pitch 11 the next day and then, after retreating due to a storm, the final pitches.

"On a route like this one conditions and logistics therefore are very important, even the easier pitches can feel desperate in the sun" Pedeferri told us, before concluding "Not many of my multi-pitches are repeated and I'm really happy that Pearson succeeded."

James Pearson is an athlete Team THE NORTH FACE