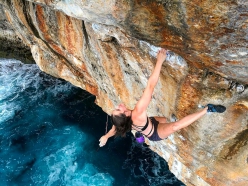 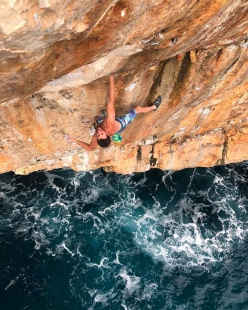 Jernej Kruder and his sister Julia from Slovenia have made a series of difficult DWS deep water solo ascents on the island of Mallorca, Spain.

In November 2016 Jernej Kruder pulled off the long-awaited first repeat of Es Pontas, the difficult and daring deep water solo established a decade earlier by America’s Chris Sharma on the island of Mallorca in Spain. This autumn the Slovenian returned, this time with his sister, and during their short trip and despite big swells they both made a series of impressive ascents.

Jernej set the ball rolling by repeating Klem Loskot’s classic 8b If you keep your face in the sunshine, you will not see the shadow, but then upped the ante with his first ascent of Animal magnetism. This climbs a line at Cala Mitjana and is described by the recent winner of the 2018 Bouldering World Cup as "Not so tall, but still very spicy, including 2 dynos."

Jernej also made the first ascent of Salty beverage at Cala Sa Nau which adds a direct and harder finish to Sharma’s Weatherman. While Salty beverage checks in at 8b, perhaps more impressively was Julia’s repeat of Weatherman. At 8a+, this is likely to be the hardest female DWS to date.