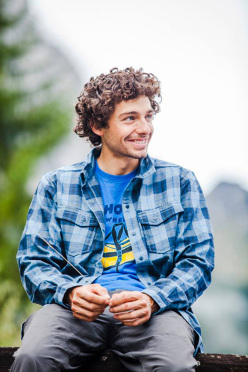 Yesterday was finally the right day. On Monday he'd fallen twice off the last difficult moves. But yesterday Jacopo Larcher almost completely unexpectedly managed to repeat Prinzip Hoffnung, the beautiful and difficult trad crack that splits the Bürser Platte in two above the small village of Bürs in Austria, freed in 2009 by none other than local hotshot Beat Kammerlander.

"This route is driving me crazy!" is what Larcher posted yesterday morning while the snow flakes swirled outside his window. The Italian climber was getting frustrated... not only because of the route's technical difficulties (somewhere in the region of 8b/8b+, E9-E10) but also because the slab was soaking wet and the scheduled departure for Spain was edging closer and closer. But then, late yesterday afternoon, the sun came out, the slab dried up and Larcher didn't wait to be asked twice.

Larcher successfully redpointed the route after having worked it on toprope previously. A choice dictated by the fact that this, for him, was something completely new: "this was my first really hard trad route, and so in the beginning I didn't really trust myself to try ground-up only" Larcher told Planetmountain. "Furthermore, I often tried alone because I couldn't find anyone to belay me so I didn't have any other alternatives." According to the South Tyrolean climber, although the first 15 metres of Prinzip Hoffnung aren't that extreme, the protection is never good making this section psychologically very demanding. "Paradoxically, the crux section higher up between the two cracks is less tough mentally since if the micro nuts snap there are some good nuts 10 metres lower down and so you don't risk a ground-fall." Larcher obviously placed all the pro during his ascent which, as you can see in the video below, came about during the dying hours of the day. "High up on the route I started to get really worried, it was getting dark quick and I began to have real difficulties seeing the holds..."

As mentioned previously, Prinzip Hoffnung - The principle of hope - dates back to 2009 but in truth Kammerlander had managed the first redpoint back in 1997. At the time though the route was in a different garb, a bolted sports climb for which trad gear and that psychological little-bit-extra weren't needed. More than a decade later Kammerlander "suddenly felt the urge to climb that face clean" so he removed the bolts and, after intense physical and mental preparation, made the first trad ascent. At the time Kammerlander was 50 years old and he reckons the climb is one of his great vertical moments, that joins historically important first ascents such as Silbergeier and Unendliche Geschichte in the Rätikon massif.

Larcher's repeat is only the third trad ascent, after Kammerlander's in March 2009 and that in December 2009 at the hands of Alex Luger. Talking about Luger: a few minutes ago the unassuming Austrian climber freed a route immediately to the left of Prinzip Hoffnung. Details will follow shortly, in the meantime though all we know is that it's another trad route, beautiful and difficult!