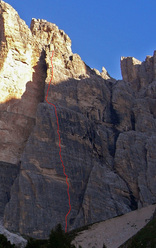 The Slovenians Dejan Koren and Sranka Vidmar have stablished Il mio criceto (400m, 7b max, 7a obl.) up the Primo Spigolo on Tofana di Rozes, Dolomites.

65 years after the historic first ascent carried out by Albino Alverà and Ugo Pompanin, the Primo spigolo on Tofana di Rozes continues to inspire, and Dejan Koren and Sranka Vidma from Slovenia have now established a new line up this impressive rock bastion.

The 30-year-old and his girlfriend established the route over two weekends, chosing a line close (circa 10m) to "Aspettando la vetta", the route established by Massimo Da Pozzo and Giammario Meneghin in 2004. The new line crosses Aspettando on the third pitch and then breaks off left at the big roof. It was established ground-up except for the roof where Koren abseiled in and the distance between the bolts is, at times, fairly run out.

"The route" explained Koren "ascends truly great rock and is proteced with bolts, which in some places are far apart, so nuts and camming devices up to Camelot 2 are needed. The new route is very similar to those of Massimo da Pozzot, the talented local climber who has put up a lot of new routes here on the Tofana di Rozes which I've repeated, such as La danza del Tapiro, I gladiatori, Da Pazzo vecchio pazzo, Compagni di merenda, Good bye..."