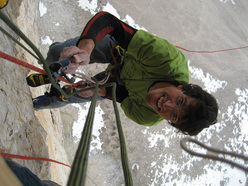 The climbing season in the Dolomites began in earnest at the start of June with the repeat of Solo per vecchi guerrieri by the Basque brothers Iker and Eneko Pou. And just the other day, on Wednesday 30 June to be precise, another testpiece was repeated, namely Pan Aroma, the 8c first ascended by Alexander Huber through the large roof up the North Face of Cima Ovest di Lavaredo. The man responsible: Hansjörg Auer. Not a bad start to the season...

Auer's redpoint came about after three days of working the route (split over a two week period). Auer told us "Panaroma is really awesome, you climb in a position which is hard to imagine. To reach the crux pitch, the roof, you first need to climb a pumpy 8b+. The roof is exactly the opposite, short and athletic, and it's not easy to combine these two pitches. I sent all the pitches first go on the fourth day. Climbing the last two easy pitches was like wading through a waterfall, and then we abseiled off the ledge at half-height."

For the record, Auer climbed the route together with Barbara Zangerl, the Austrian "boulder queen" as he described her who, after having sent problems up to Fb 8a+/8b, found herself at the base of her first ever multi-pitch! And what a route! Talk about baptism of fire...