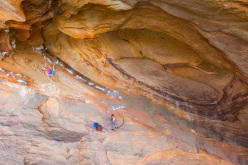 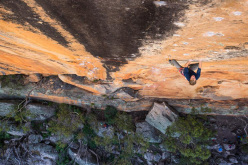 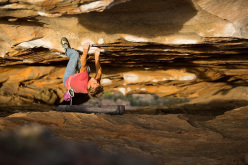 Three climbing videos featuring the Grampians mountains in Australia where Jorg Verhoeven and Katharina Saurwein climbed the routes Eye of the Tiger and Groove Train as well as the boulder problem Wheel of Life.

After the first video in Tasmania, here are a further three climbing gems in Australia's Grampians massif, visited by Jorg Verhoeven and Katharina Saurwein last year. The first video documents the Austrian climbing Eye of the Tiger, an 8a freed by Scott Walter and considered one of the most beautiful routes in the area. Groove Train, freed by Ben Cossey in 2009 and featured in the second video, is just as beautiful and while its 8c moves on the legendary Taipan Wall are certainly exquisite, they happen to have that "extra spice" due to some impressively long runouts… In the third video the Dutchman emerges from the Hollow Mountain Cave after 60+ moves which, when climbed in sequence, give rise to the 8C boulder problem Wheel of Life, freed in 2004 by Dai Koyamada.