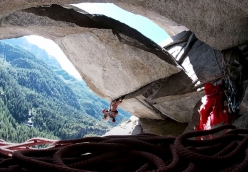 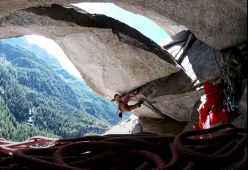 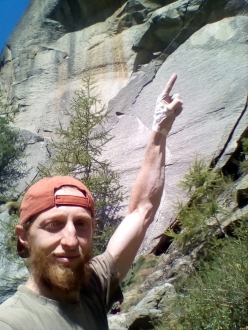 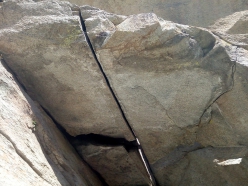 Italian climber Giacomo Meliffi has made a free solo ascent of Legoland, the famous crack climb in Valle dell’Orco, Italy.

On the first of September Giacomo Meliffi made a free solo ascent of Legoland, the legendary crack climb in Italy’s Valle dell’Orco first ascended in 1984 by Bruno Balma and Daniele Caneparo and subsequently freed by Roberto Perucca. The new guidebook written by Paolo Seimandi and Maurizio Oviglia describes this line as "one of the legendary valley routes, quite rightly considered by many as the Italian version of Yosemite’s Separate Reality”; indeed, the roof that juts out of the Sergent cliff has much in common with the famous crack first climbed in 1977 by Ron Kauk. Legoland’s beauty and importance cannot be overstated and it was first climbed free solo by visiting American climber Alex Honnold in 2018.

Meliffi is no household name but it may ring a bell as in 2019 planetmountain.com reported about his repeat of the peculiar trad climb Der Ungeheuer sei Mutter in Germany’s Frankenjura. Usually the 25-year-old never climbs without a rope and he explained "apart from the very early days when I started climbing, when I was perhaps a little more reckless, I hardly ever free solo. But Legoland free solo was something I’ve really wanted to do, and to be honest it’s the only route I can think of that I’d be prepared to do without a rope." While recalling that the reasons that push someone to undertake such a dangerous style of ascent are extremely personal, here’s Meliffi’s report and the video documenting his solo.

My relationship with Legoland began two years ago, during one of my first crack climbing trips. I was with my friend Pierfrancesco de Falcis in the Orco valley, at the base of the Sergent rock face, and after having repeated some of the classics we decided to get onto something a little harder. In no time at all we were beneath the infamous Legoland roof (7b/7b+), and after a few attempts and thanks to Pierfrancesco's encouragement I managed to make a free ascent.

I still remember the feeling of great joy of having managed to climb such an beautiful crack and immediately I started thinking about a much more famous crack in America, about Separate Reality in Yosemite, that has been climbed free solo on several occasions by some extremely talented climbers: Wolfgang Güllich, Heinz Zak, Dean Potter, Alex Honnold and Will Stanhope. After that first encounter with the route I said goodbye to the valley but promised myself that one day I’d return to try Legoland in the purest style possible: free solo.

So, on the afternoon of the 1st of September I set off up the path that leads to the base of the cliff. I carried with me: rope, gear to self-belay the first pitch and a bundle of doubts. When I reached the base of the Legoland roof I decided to climb through the hole, past the huge jammed boulder, in order to abseil from the top and try the finishing moves.

After repeating the sequences several times and looking for the safest way to climb the moves, I returned to the "base" of the pitch. I was scared and considered bailing, but nevertheless stated to tape up my hands: “I’ll need them to climb some other routes” I thought to myself. But then all of a sudden everything stood still, the moment was perfect: I got up, turned on the camera, unclipped the daisy chain from the belay, took a deep breath and started climbing.

I hadn’t managed to try the horizontal section of the roof with the rope, but I was sure it wouldn’t present any problems, and anyways, if I didn’t feel in control I reckoned I’d be able to climb back from the first half. After a moment of hesitation on the first move I started to jam properly and knew that I simply wouldn’t fall. All fear disappeared, and I continued across the roof, focusing only on my breathing and the moves. I quickly reached the end of the roof, from here it was just a question of choreographing the moves I’d tried before to perfection. And that’s precisely what I did.

Left hand jammed high in the crack stuck, right hand to sloper, then share with left, right hand to a good shoulder push, place my left foot on a good foothold, reach the good crimp with the left, balance through with right foot, right hand on discreet hold, right foot on two good edges, then return to the crack, reach the top of the climb and let out a liberating scream.

Fantastic! I’d kept my promise and I achieved something that, only a couple of years ago, seemed absolutely impossible. Back on the ground I turned to look at the wall in silence and patted myself on the back. But my mind was elsewhere, already beginning to think about what’s next, fantasise about new projects and new routes. But for today that was enough, the time had come to celebrate.

I’d like to dedicate this climb to all the friends who have been close to me during this period.
Giacomo Meliffi