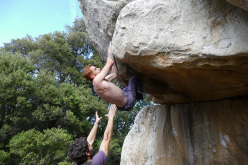 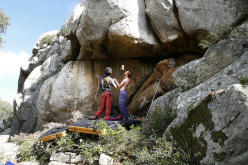 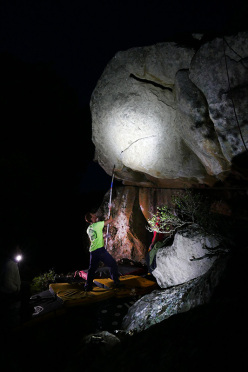 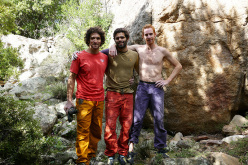 The report by Gabriele Moroni about his first climbing trip to Sardinia during which, at Bosco di Luogosanto in Gallura, he freed Patagarroso, the first 8B boulder problem on the Italian island.

"Hey Fil! After hassling me for two years you’ve finally managed to get me over to Sardinia, right?! "

This is how our three-day bouldering session began above Luogosanto, the picturesque village lost somewhere in Gallura’s countryside… It is here that Filippo (Manca, Ed), the climber originally from Nuoro who moved to Milan for work reasons, had discover a magnificent sector called "Il Bosco”, the forest.

During our first day Fil took us on a quick tour of the area and as we explored the place we walked below an imposing triangular boulder. The rock looked really incredible, more like sandstone than Sardinian granite, but unfortunately one of the first attempts resulted in a fairly unpleasant landing. What’s more, I couldn’t make out a line of holds and this intimidated me, so I gave up and went on to see the other problems nearby…

During a relaxing break the next day I asked Fil to accompany me to the "huge triangle". With more time to spare and on closer inspection we noticed enough holds to imagine a line up the arête on the right. Overjoyed we set off for some ropes and brushes and immediately started cleaning it… Shortly afterwards we were joined by Mauro Calibani who with his visionary eye for boulder problems noticed a potential line straight through the middle using the flared cracks. "You won't stick those holds, not even with superglue!" I said as I made fun of Mauro while sorting out the landing with some dead branches…

In the meantime the sun began to set, the rest of the group joined us below the boulder and we started out attempts. Shortly afterwards I managed to send the line Filippo and I had cleaned, Bette Papassino, circa 7C. A superb problem, even by Fontainebleau standards! While Mauro and Fil had fun trying this new problem I stacked a pile of crash pads below the roof and tried to fathom how to hold the two cracks. Then I discovered two tiny ripples that allowed me to almost stick the cracks. All I had to do now was understand whether it was possible to link it to Bette Papassino, seeing that they shared the same finish… I started the assault and quickly managed to decipher all the moves except for one, the exit out of the roof. Darkness began to fall and even with my headtorch on I failed to find a sequence. I’d have to give it another go tomorrow.

I woke up the next morning and immediately realised it was hotter than before, the wind had dropped and since it was our last day, I began to feel the pressure. We reached the forest, a big group of us including some other Sardinian climbers from Nuoro and their families, the atmosphere was super friendly and relaxed. Strangely though I was anxious, I had trouble dealing with the heat and failed to keep calm. I began to imagine how crazy I’d get attempting the project. It seemed feasibile, but for the send I’d need decent conditions. And I really didn’t wanted to return home empty handed, without having climbed this masterpiece.

I warmed up soloing a couple of routes to enter into my personal bubble and then began working the project. After a good session I finally found the solution, a contorted high step, right foot at chest height, that enabled me - if I positioned my body properly - to exit the roof almost statically! I made the most of the novelty-induced adrenaline and attempted the problem from the start. Magically my body slipped into just the right position and suddenly I found myself eyeing the second crux, where you have to match a hold to join Bette Papassino. But I lost concentration and landed back down on the pads. I made some further attempts but failed to find the right body position above the roof, what’s more it started to get really hot, one could feel the sun edging closer and closer to the problem…

I decided to have a rest for a couple of hours until the sun began to set and temperatures settled to an acceptable level. I spent my time with the rest of the group, but nevertheless I tried to keep the focus. After a while Filippo, who was really close to sending the 7C, and I decided that it had cooled down enough and that the time had come to give it another go.

I started first and managed to transform the pressure into energy, I really felt I’d manage to give it 100%. I set off, the first two move felt easy, then came the high step, feet at the height of my mouth. My bicep locked off perfectly at 90° and my body was in just the right position! I now matched hands, concentrated on keeping my abs as tense as possible and after two tiny slaps I reached the "thank God" crimp. All I had to do now was the final 7B section of Bette Papassino, I took my time and made no mistakes!

Patagarroso is the first 8B boulder problem in Sardinia and in my opinion one of the most incredible lines in Italy! More than a boulder problem, a line of holds or a grade though, behind this problem lies a story of friendship and mutual respect with Filippo that began in an old gym in Milan and that, for now, has blossomed in this beautiful wood in Gallura!

I fully recommend this area to everyone. I was blown away by the quality of the problems and the rock and there is still plenty of potential, both at Luogosanto and throughout the rest of the region. So come armed with a brush and enjoy the bouldering!