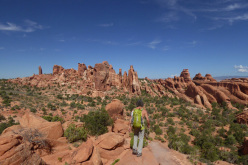 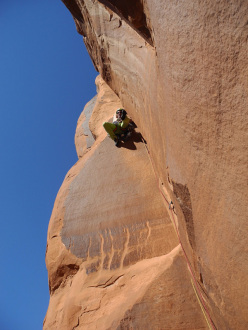 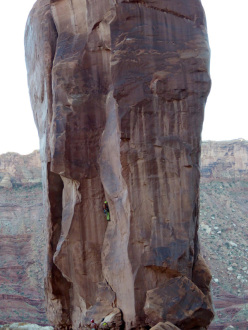 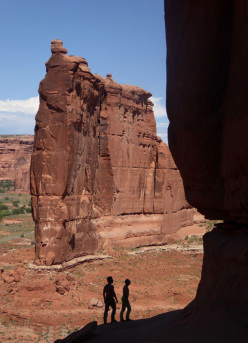 Satisfied with our climbs at the Colorado National Monument, we returned to Utah and set off on the road towards Moab, the real Mecca for sandstone climbing. The surrounding area ("surrounding" as a figure of speech: here distances are on a completely different scale...) is made up of a treasure trove of towers and faces scattered into the four corners of an immense plateau carved by deep canyons. You're spoilt for choice: the towers in the Arches National Park, those in Canyonlands, the Fisher Towers, Indian Creek, the towers of Castle Valley, the rock faces of Wall Street, the formations along Potash Road, Day Canyon, Long Canyon, Ice Cream Parlor, Counthouse Wash, Heat Wave Wall...

We decide that the time has come for the Arches National Park. The name says it all: water and ice, extreme temperatures, subsoil movements and a hundred thousand years of erosion have shaped this landscape which is home to the largest number of natural arches on the planet. There are over two thousand recorded arches (sic!), varying in width from three feet - the minimum to be classed as an arch - to the three hundred feet of Landscape Arch. The native people lived for thousands of years in this land: first Archaich, then Puebloan, Fremont and Ute foraged for animals, medicinal plants and stones to make tools and weapons. The first non-native explorers arrived in the late 1800s, when the civil war veteran Wesley Wolfe and his son John settled here. You can now visit the Wolfe Ranch which takes you on a journey back in time.

The entrance to the park is guarded by the formation known as the Three Penguins (the name is spot-on: they really do look like three penguins!). Then, in front of our very eyes an astonishing parade of towers appeared, with some of the most fantastical names. You have the Courthouse Towers: Tower of Babel, Argon Tower, The Organ, Three Gossips, Sheep Rock, to name but a few. Then there's Owl Rock and Balanced Rock (a balancing mass which seems to defy the laws of gravity) and, to the far north, Devil Dog Spire. Beyond Devil's Garden a solitary tower rises up called Dark Angel. And lastly, towards the northwest, the Marching Men. All at intervals between huge natural arches: Double Arch, Turret Arch, Delicate Arch, Sand Dune Arch, Broken Arch, Tapestry Arch… There is just one bit of bad news for climbers, amongst all the delights: in the Arches National Park the sandstone is very soft. It's Entrada Sandstone, so it’s quite crumbly and friable - although not quite as bad as the sandstone of the nearby Fisher Towers. The climbing and, in particular, placing gear require a lot of care. The beauty of the towers and the context however more than make up for this and compel us to get climbing.

In all honesty, our first day of climbing in the Arches provided a really bad example of choice and planning. It could be used in a CAI Mountaineering School lesson for "Planning a Climb" as a great example of "what not to do". In the space of a morning we managed to make enough stupid mistakes to set a Guinness World Record. Idiocy number one: we pay no attention to the weather forecast predicting a noticeable rise in temperatures (up to around 35°) and recommending climbs at a higher altitude than that of the Arches. Idiocy number two (this one was really bad, we should be ashamed): despite the heat, we decide to start climbing a western face late in the morning (also due to the excesses of the previous evening...). Idiocy number three: we choose a climb with difficulties which call for the use of tight climbing shoes. To cut a long story short: the climb became quite an ordeal, which we managed to finish only thanks to the beauty of the formation and the elegant pitches - along with a kind of pride which borders on masochism. Anyway, in the evening we celebrated (with aching feet and burnt shoulders) the Three Gossips summit via the Steck-Roper route which was free-climbed 12 years after the route was first climbed, with its crux of a sandy flared stopper crack. Whilst thinking back on our stupidity, we knocked back vast quantities of liquids to make up for our dehydration.

The following day we decided we would be smart. We set off at first light and walked across the Devil's Garden towards the solitary tower known as the Dark Angel. In the distance, the myriad of towers looked like the Manhattan skyline; with Salt Valley and the Yellow Cat Flat taking the place of the ocean. On the horizon, the Dark Angel's deep sandstone colour stood out against the blue of the sky. The approach was breathtaking, through a series of natural arches: the main ones being Skyline Arch, Tunnel Arch, Pine Tree Arch, Landscape Arch, Partition Arch, Navajo Arch and Double O Arch. Dark Angel sits on top of a mound and is about fifteen minutes walk away from the other formations, categorically bringing to an end the sequence of towers in this part of the park. The name couldn't be more spot-on: the colour of the rock which is much darker than that of the other towers makes it appear like some kind of being on the edge between heaven and hell. Mindful of the previous day's experience, even though we chose a west-facing route again, we climbed in the morning...it was the Rearick-Camps route, first climbed in 1962 and only free-climbed 24 years later. It was Gian Luca's turn for the initial chimney. He was tempted to avoid it by face-climbing a section. "That doesn't count! An American climber would never do that" - Manrico and I reproached him. Touché: he came back to the start and showed us how a Biellese climber handles chimneys! We were in good spirits: the temperature was decent while we climbed, nothing compared with the suffering on the Three Gossips. It was a relaxed climb, with intervals for photos, filming and joking around, taking the mick out of each other for the previous day's stupidity. The view from the top extended towards the Needles and the Island in the Sky towers, beyond which you could just imagine the never-ending Colorado Plateau.

Not quite satisfied, we decided to finish off the day by climbing the Three Penguins. This time, as "The Wise Climber's Handbook" would recommend, we chose an east-facing route for the afternoon: the Right Chimney, which the locals rate as "five stars". First climbed by Higgins and Kennedy in 1976, it was only 1987 before the climb was repeated. In spite of the name it isn't a chimney: the climb starts off with hand and fist cracks, then an off-width crack on the tower, finishing up with a section of face climbing. I managed to be granted the amazing right-facing corner pitch, whilst this time the enticing off-width fell to Gian Luca, who got a lot of grazes as a result of his awful decision of climbing it without a T-shirt. Coming back down a steep gully by the light of an iPhone (all three of us had forgotten our head torches - another great example for CAI students), we slipped and tripped up many times, but we got back to Moab really content with the day.

Translation from Italian by Jane Ledlie.