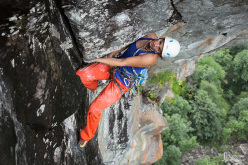 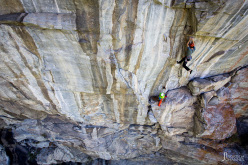 In September 2014 German rock climbers Alexandra Schweikart and Christopher Igel made the first ascent of a new route on the righthand side of a face above the village San Carlo in Valle Bavona, Ticino Switzerland. The two noticed the wall from the Robiei cable car but, injured at the time, had to wait for 6 months before returning to forge the line ground-up. They used mostly trad gear but placed bolts at the belays and at some inevitable blank sections.

Schweikart reports "The wall turned out to be incredibly steep but offers all types of climbing, from slabs to cracks, up excellent gneiss. After five days including a hammock bivy and frequent flyer miles the route was "dressed" and ready to send." The couple redpointed the whole route in a single day, swinging leads with both leading the hardest pitch. Della Funivia has 13 pitches of sustained climbing of which the first six pitches will never be touched by rain. "This is definitely the steepest, shadiest 300 meter wall in Ticino we have seen so far", they stated "which makes it a perfect climbing venue for the hot summer days!"


Della Funivia
First ascent: September 2014
Height: 300m, NW, 13SL, sugg. grades: 7c, 6d*, 7b, 5+, 7a, 7b, 6c+, 7b+, 6c, 7a, 6b+, 6c+, 6b+
*as we had very distinct perceptions about this pitch we decided to introduce the grade 6d!
Type of climbing: Gneiss; traditional; cracks and faceclimbing
Base: San Carlo, Cable Car Parking.
The Approach starts one turn below the cable car (little parking spot). Walk downhill and later uphill around the rock face on your right for 25 minutes to the base of the climb. Descend along the summit ridge (cairns) and below slabs southward 1-1.5h.
Gear: Anchors are boltet; take 50m half ropes, two sets of Dragon Cams and medium sized Wallnuts.
Be aware: After the 4th pitch retreating is rather difficult / impossible unless you climb back! The upper part of the route needs a couple of days to dry after rain.