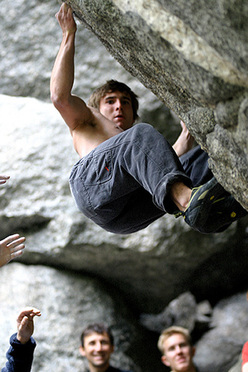 PORTFOLIO / gallery Portfolio: Daniel Woods repeats 9a+ & 9a at Oliana and Margalef

Daniel Woods repeats 9a+ & 9a at Oliana and Margalef

At Oliana in Spain Daniel Woods has redpointed Papichulo, the 9a+ sports climb freed by Chris Sharma in 2008.

Daniel Woods is on a roll. After repeating Thor’s Hammer 9a+ at Flatanger - Hanshellern in Norway last autumn, the American climber has returned to Europe once again and is currently in Spain where he has redpointed both Víctimas Pérez 9a and Papichulo 9a+. While the former is located at at Margalef and was freed by Ramon Julian Puigblanque, the latter is situated at Oliana and was freed by Chris Sharma in May 2008, in preparation for his Jumbo Love at Clark Mountain.

After building up resistance and falling off twice from the top, Woods sent the 50m route last night stating "This is the most resistant route I have climbed on. 50 meters limited rests, perfect rock, sketchy slab outro... Has everything 💯. Props to Chris Sharma for having the vision and establishing it"