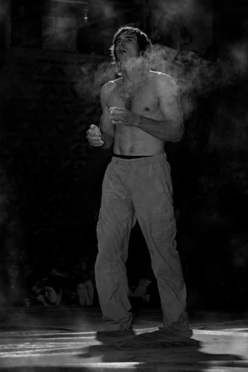 In March 2007 British climber James Pearson stunned the climbing world with the first flash ascent of a confirmed 8B boulder problem, Ganymede Takeover at Brione, Switzerland. Four and a half years have passed since then and standards have risen considerably, so much so that Daniel Woods has now checked in with the flash of Entlinge, an 8B+/C problem established by Fred Nicole in 2005 in Switzerland's Murgtal. Originally graded 8C, it was first repeated by Bernd Zangerl in 2009.

Woods has numerous 8C ascents to his name including the first ascent of The Game V16/Fb8C+ at Boulder Canyon, Colorado, USA as well as the recent first ascents of Mystic Stylez and La force tranquille 8C at Magic Wood. According to 27crags.com, the American climber felt Entlinge suited his style perfectly and may be 8B+. Regardless of this downgrade or slashgrade, the ascent must be considered the world's hardest flash to-date.


Video of Bernd Zangerl making the second ascent of Entlinge