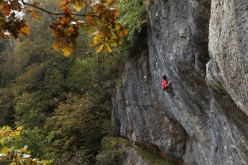 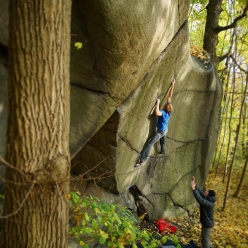 While Alexander Megos has repeated Becoming, a 9a+ sports climb in Germany’s Frankenjura, Daniel Jung and Dai Koyamada have repeated Corona 9a+ nearby.

Autumn in Germany’s Frankenjura, an absolute must for all those questing for some difficult redpoints. And while the temperatures drop and the first leaves fall, so too do the first hard climbs.

The first to capitalize on the newly found good conditions was Alexander Megos who repeated one of the last hard routes he still has to climb in his backyard area, namely the 9a+ Becoming 9a+ at Rotenstein. This was freed in 2014 by Markus Bock who - unsurprisingly - was also the man behind Corona, another 9a+ freed eight years previously, back in 2006 and defined the hardest sport climb in the Frankenjura at the time.

In the space of just a few days this route has now been repeated twice: Germanys’ Daniel Jung set the ball rolling by sending it the other day, in the dark… while Japan’s Dai Koyamada sent it last week after a mere three days of work. Koyamada’s success comes in the wake of an impressive sending spree that includes The House of Shock 9a, The Essential 9a, Elder Statesman 9a, The last rites 8c+, Unplugged 9a and Zootopia 8c＋. Not bad for a 40-year-old.

Returning to Megos quickly.The other day at Gothenburg in Sweden the German sent a problem that for over 20 years had been known as the Trainspotting project. The grade is somewhere in the region of 8B+ but, far more important that the grade itself, is the fact that Megos has described it as "one of the coolest things I've ever seen." Now that's saying something.