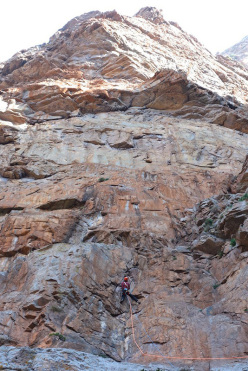 French climbers Arnaud Petit and Jeff Arnoldi have completed Le non-sens et la joie (8a, 250m), a new route up the West face of Capu Cascioni, close to Porto on the western side of Corsica

French climbers Arnaud Petit and Jeff Arnoldi have completed Le non-sens et la joie, a new route up the West face of Cascioni, close to Porto on the western side of Corsica. The climb takes a line between Enterre mon cœur and Syncope and the first two pitches were climbed by Petit in October 2013 together with his wife Stéphanie Bodet. Petit returned this March with Jeff Arnoldi to complete the seven pitches which lead to a large ledge at 2/3 height. From here the summit can be reached by following Enterre mon cœur.

Le non-sens et la joie breaches "beautifully steep orange granite" and was established ground-up, using mainly trad gear and only 14 bolts along the pitches. Difficulties are estimated at 8a (7b oblig) and although the route has not been freed yet, the first redpoint is surely only a matter of time: the crux pitch is described as "World class. Hard face then classic roof climbing on gear. Exhilarating finish."

The Frenchman told Planetmountain "Corsica for me represents a wild place with lots of world class granite walls, some of them huge, some very small, but always incredible because of wind-shaped tafoni features. I was lucky to discover this island as a young child and later establish my first multi-pitches there, and even today I still find some great projects there. I also really appreciate the evolution of the spirit of the climbers there, who try to establish new routes with a minimum of bolts. Yes, I'll be back soon!"

Thanks to: Petzl, La Sportiva, Patagonia and Totemcams