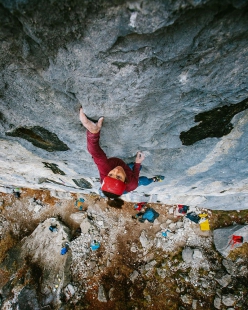 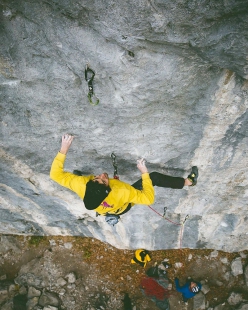 Jacopo Larcher making the first ascent of Sprengstoff 9a at Lorünser Wändle in Austria, November 2021
Photo by Jacopo Larcher 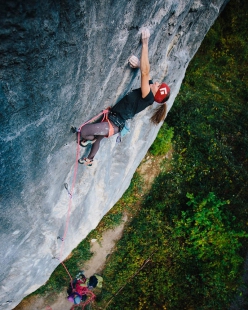 Barbara Zangerl climbing at Lorünser Wändle in Austria. This is one of the most important crags in the Vorarlberg region and currently at risk of being quarried.
Photo by Jacopo Larcher

Climbing access at risk at Lorüns, the premier crag in Vorarlberg, Austria

Local climbers Barbara Zangerl and Jacopo Larcher have launched a petition to save Lorünser Wändle, one of the most important crags in Vorarlberg, Austria currently at risk of being quarried.

When in November 2020 Jacopo Larcher made the first ascent at Lorüns of an open project first bolted by Beat Kammerlander 25 years ago, he chose a name which couldn't have been more apt: Sprengstoff. Explosives. The name was chosen carefully since the climb is located next to the local quarry, and he and all local climbers hoped that the crag would not end up, quite literally, in a cement bag. Something similar had already happened to Zukunftsmusik, Beat Kammerlander's masterpiece freed in 1988 and, as such, one of the first 8b+ in the world.

Nestled in the woods just above the village, Lorünser Wändle is historically one of the premier crags in the Vorarlberg region, an important testing ground and great place for climbers to hang out and reconnect with nature. The locals are extremely concerned that the quarry may destroy the crag in the not too distant future - 90% of the routes could potentially be at risk - and in an attempt to protect the rocks for future generations local climbers Barbara Zangerl and Larcher have now launched an online appeal asking all climbers for support.

05.04.2021
Barbara Zangerl explosive on Sprengstoff, 9a at Lorünser Wändle in Austria
At the crag Lorünser Wändle in Austria Barbara Zangerl has made the first repeat of the 9a Sprengstoff, freed by Jacopo Larcher in November 2020.
05.05.2004
Usobiaga on-sights 8b+, Fischhuber flashes 8c
Patxi Usobiaga on-sights “La Dita del Guerriero ” 8b+, Covolo and “Jurassic” 8b+ at nearby Erto, Italy, while Kilian Fischhuber flashes “Tai chi” 8c at the Lorünser Steinwand, Austria.