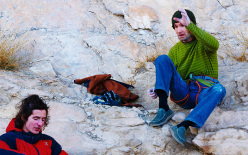 American climber Chris Sharma has made the first repeat of La Dura Dura 9b+ at Oliana, Spain.

"So happy to have finally sent La Dura Dura! What an epic battle. A huge thanks to everyone for all your support along the way! Ahora a disfrutar!!!!!!!" Words of joy and relief, posted an hour ago by Chris Sharma after having finally redpointed La Dura Dura, the line he bolted at Oliana and touted intensely together with Adam Ondra. Both were close to freeing the route, yet it was Ondra who succeeded first at the start of February, suggesting the massive grade of 9b+ and indicating it might even be slighly harder than his Change at the Hanshelleren - Flatanger cave in Norway. During the last month Sharma lost none of his motivation and even managed to find that little extra yesterday to clinch the first repeat. This is fantastic achievement from the man who, like few others, has shaped the development of sports climbing.