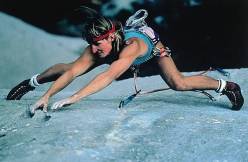 Patrick Edlinger climbing in the Verdon Gorge
Photo by

Chris Sharma's persistent vision for the absolute extreme is what has transformed Oliana into one of the world’s most important high-end crags, and even while he was working on La Dura Dura the American kept his eyes open for possible new lines. Just to the right lies a heinous set of crimps that may well prove even harder, possibly even 9c. Sharma happened to bolt the line the day French sport climbing pioneer and legend Patrick Edlinger passed away, hence the Le Blond nickname in his honour.

RELATED NEWS
17/11/2016 - Adieu Patrick Edlinger
On Friday 16 November 2012 Patrick Edlinger died aged 52. The Frenchman was one of the early pioneers and absolute legends of sport climbing.