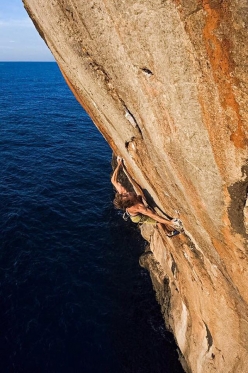 American climber Chris Sharma has made the first ascent of Alasha, a difficult new deep water solo climb on the island of Mallorca.

Last week Chris Sharma sent his long term project he had attempted over the last five years on the NW coast of the Spanish island of Mallorca.

Described as being "a stunning piece of stone in a very epic location", the line boasts a different style of climbing to Sharma's famous Deep Water Solo climb Es Pontas, but of similar difficulty. Sharma ascended Es Pontas in 2006 and at the time he stated difficulties were somewhere in the 9a/9a+ region. It is currently unrepeated.

According to Sharma the crux boulder sequence of his new route could be 8B, circa 18 meters above the water. The route has been named after his daughter, Alasha.