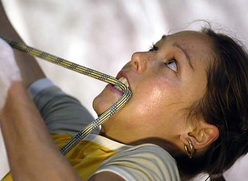 Trad E8 ascents from foreign climbers are a rare occurrence in Britain, E8 female trad ascents even rarer. America's Lisa Rands set the ball rolling in 2004 with her headpoint ascent of End Of The Affair (E8 6c) at Curbar and since then only a handful of other women - such as Britain's highly talented Lucy Creamer - have ventured into these sort of difficulties.

A few weeks ago Caroline Ciavaldini from France made impressively fast work of Point Blank E8 6c at Stennis Ford, Pembroke. What makes the 26-year-old's ascent of David Pickford's 2009 route noteworthy is not only that this was only her second-ever trad route - after the magnificent Pleasure Dome E3 - but also that the former French champion attempted to flash the line after having watched her partner James Pearso on-sight the 40m line.

Ciavaldini's attempt failed on the final moves and after her 15m fall she immediately pulled the ropes and led the route to the top. Some of Britain's hardest female trad on-sights remain Lucy Creamer's ascents of Boss Hogg (E7 6c) and Muppet Show (E7 6c) in Pembroke in 2004 and with the rise in standards over the last 5 years - Ciavaldini has redpointed up to F8c and onsighted up to F8b - it wouldn't surprise us female E8 on-sight or female E9 headpoint become a reality in the near future.