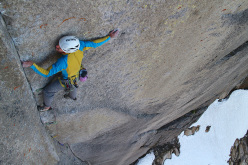 Dave MacLeod making the first free ascent of Disco 2000 (8a+) Blåmann, Kvaløya, Norway. Here he is pictured climbing the crux of pitch 2; the Arctandria corner (8a+).
Photo by Calum Muskett 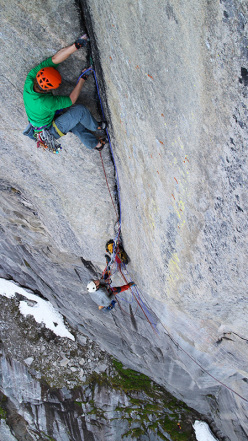 Dave MacLeod, Calum Muskett and Jacob Cook have made the first free ascent of Disco 2000 (8a+) on Blamman, island of Kvaløya in Norway.

MacLeod teamed up with fellow British climbers Calum Muskett and Jacob Cook and the trio quickly worked its way up the route, often late at night, making the most of that latitude’s midnight sun period. They discovered that the line was indeed free climbable, with sustained difficulties up to 8a+. No new in-situ pro was added and the at times committing climbing was protected by a mix of trad gear, blades and peckers.

Due to frequent periods of rain they were forced to free the pitches in two separate stints, returning to the previous highpoint after the crux pitch by ascending their fixed ropes and then making a committing rush up the last nine pitches just before the rains set in once again. Unfortunately the wet weather prevailed and the team returned home without being able to attempt the first single day red point.