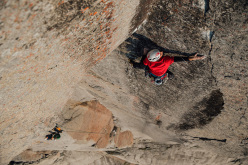 Bilibino 2015: Jacopo Larcher on one of the crux pitches of Red Corner (7c+ / 450m) on The Commander, established together with Hansjörg Auer and Siebe Vanhee.
Photo by The North Face / Elias Holzknecht / Jordi Canyi 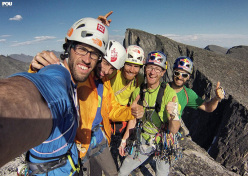 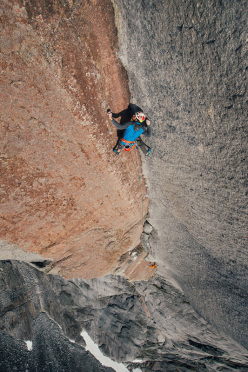 "There are certainly 100’s of new routes to climb in this condensed area. The quality of rock in general is excellent." These words, written last year by the Australians Chris Warner and Chris Fitzgerald after the first exploratory climbing trip to Bilibino in Russia, didn’t fall on deaf ears and so this July a strong international team com pried of Austria’s Hansjörg Auer, Italy’s Jacopo Larcher, Spain’s Eneko Pou and Iker Pou and belgium’s Siebe Vanhee travelled to NE Siberia to take a closer look at these granite spires.

The North Face climbers spent 23 giorni days at Base Camp in the Chukotka region, during which they climbed 7 new routes on the two main peaks, The General and The Commander (Komandnaya), and one new route up the hitherto unclimbed peak they called The Monk.

To be as efficient as possible they split into two teams, one comprised of Auer, Larcher and Vanhee, the other of the Pou brothers. Most routes were climbed in a single push, weather permitting, and using trad gear only, apart from Red Corner on Commander where 4 8mm hand-drilled bolts were placed, 3 at the belays and 1 on one of the ptiches.

On Facebook, Larcher explains "we also had to struggle against the bad weather and against millions of mosquitos, which made our life way harder(!!!). The flaky and loose rock on some pitches/routes added some spice to the whole experience ;-) We are really happy with the expedition and our achievements, but most of all with the good time we spent as team!"

The ascents were documented by two cameramen, Austria’s Elias Holzknecht and Spain’s Jordi Canyi, and a film about the expedition will be released in spring 2016.