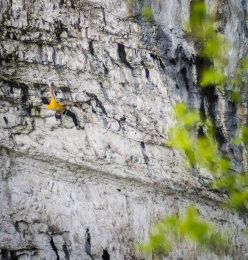 Ben Moon storms through Rainshadow 9a at Malham Cove

British climber Ben Moon has made the 4th ascent of Rainshadow 9a at Malham Cove, England.

48-year-old British sports climber Ben Moon proves that age is no barrier to this sport with his astounding redpoint yesterday of Rainshadow, the 9a continuation of Raindogs at Malham Cove freed by Steve McClure in 2003.

During the late 1980’s and early 1990’s Ben Moon, together with climbing partner Jerry Moffatt, was one of the undisputed aces of British - and world - sport climbing, dominating the new sport and pioneering climbs from 8a all the way to 9a.

In 1984 Moon, dreadlocked and a mere 18 years old, caused a stir with his groundbreaking Statement of Youth at Lower Pen Trwyn, an 8a which heralded the true start of the sport climbing revolution in Great Britain. In 1989 he made the first ascent of two of the hardest climbs in France, Agincourt at Buoux and Maginot Line (also referred to as Le Plafond) at Volx, and these 8c’s paved the way for the pinnacle of his career, Hubble at Raven Tor. With a Font 8B+ section followed by a 7c route, this extremely bouldery limestone testpiece was hailed as the world’s first 8c+ but in its 25-year history it has only been repeated 5 times - and attempted unsuccessfully by many of the world’s best - giving rise to healthy speculation that it may well be graded 9a. This, should it be confirmed, would mean that the benchmark 9a Action Direct climbed a year later by Wolfgang Güllich in Germany’s Frankenjura would no longer be considered the first of its grade.

In 1993 Moon retuned to Lower Pen Trwyn to make the first ascent of the 8c+ Sea of Tranquility and he also set his sights on an even harder project still, the enormous overhanging North Buttress at Kilnsey crag. This intense line of crimps required a new level of power and resistance and after a series impressive attempts, injuries forced Moon to abandon the line. Steve McClure eventually freed the route in 2000 to create Northern Lights, at the time the country’s third 9a.

During Moon’s heyday he also devoted much time to hard bouldering and this peaked with, amongst others, his first ascent of Voyager Fb8B+ at Burbage in 2006. In the ensuing years Moon has dedicated more time to his family and his business but evidently his perennial motivation and determination have remained intact. Sunday’s repoint of Rainshadow is only the 4th ascent of the route and proves that, 25 years after freeing Hubble and just days before his 49th birthday, he remains one of the world’s leading sport climbers.