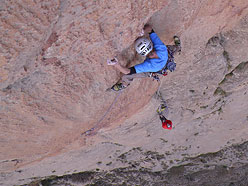 Fred Gentet, Nicolas Kalisz, Stéphanie Bodet and Arnaud Petit have just returned from the Taghia Gorge where they made the first ascent of the 800m Babel 7c+ on Tagoujimt n'Tsouiant. The four were accompanied on the highest wall in the gorge by Fred Ripert who filmed the 15 day ground-up ascent.

The route is extremely sustained and spaced protection renders climbing airy and at times exposed. The climbers chose to make their ground-up ascent with a minimum of bolts, climbing free and then resting on suspension hooks, camming devices or pegs to place the bolts. The obligatory climbing between one bolt and the next is circa 7a+, while the distance varies from 4m on the harder sections to 7 or 8 meters on easier 6c ground. The greatest difficulties were finding good hook placements on the particularly smooth north facing wall.

Arnaud Petit commented: "the psychological nature of the climbing is important, and the sustained difficulties, beauty of some of the pitches, surroundings and the immense face all make "Babel" an exceptional big wall."

Although all pitches were freed, the first ascentionists didn’t climb Babel in one single push. Ten days after the first ascent Yann Ghesquiers made the first free ascent, on-sighting the entire route together with Didier Angonin, who fell 4 times. They underlined the run-out nature of the route, and Stéphanie and Arnaud commented: "We chose climb as follows: to be at our mental, physical and technical limit. We’re well aware that we ran it out on a few pitches, but we decided not to add any further bolts at a later stage, especially since we had already freed those sections with the added difficulty of not knowing what lay ahead. We’re certain that Babel will not become an instant classic. For a few years it will remain a fantastic test for the world’s best. One has to be careful because even if the difficulties are nothing extraordinary, the actual climbing is a completely different kettle of fish. It demands a certain cool and also plenty of stamina."

Tagoujimt n'Tsouiant is an immense wall which dominated the village immediately to the north. Aid routes were first put up in 1976, and only a few routes (such as "Fantasia" (7c, 700 m, David Kaszlikowski & Eliza Kubarska, 2005) free the entire wall. It is worth noting that Taghia is becoming increasingly popular amongst climbers, with more than 80 climbers a day in the small village. This posed logistical problems, since the two gites can host up to 40 people at a time.