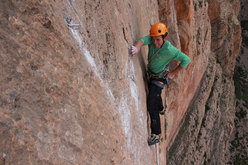 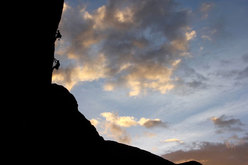 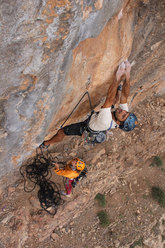 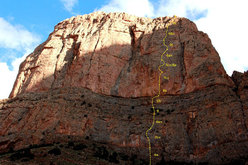 "Perhaps it's the intensity of the colours of this compact limestone which excited us most and which reminded us of the real reason of our pilgrimage: to climb." The colours are those of the Taghia gorge, of those steep walls in the canyon wedged in the heart of the High Atlas range, deep within Morocco and, by now, a destination for climbing pilgrims from all over the world.

The words were written by the Team Altroverso, a close-knit group of Italian climbers formed by Giovanni Ongaro, Andrea Pavan and Davide Spini who in four September days established their Atlante Perverso. The route starts 50m to the left of the route immediately to the left of Whisky Berber (6b). And "measures" 350m for a total of 11 pitches up to 8a and 7b obligatory. The hardest pitches, P2 (7c+), P5 (8a) and P6 (7c+) were freed by Simone Pedeferri while the route still awaits it's first free ascent as the seventh pitch, estimated at 7c+/8a, was climbed with one rest.

Some might ask what Pedeferri was doing in that part of the world. The answer is simple and can be gleamed from the report below: Simone was one of the numerous climbing friends who joined the Altroverso Team at the last minute on their Moroccan expedition... In the end the group tallied 12, including the 3 first ascentionists. And this, along with the new route, is a nice detail worth underlining. Because it proves the undisputed beauty of Taghia and also the unlimited strength of climbing and its journeys!

It's not easy to describe the emotions we felt, the myriad of red hues of the limestone wall and the scents on this journey. We departed with the certainty of seeing splendid landscapes and beautiful rock faces, but we had no idea of what we'd actually manage to do. The project was based around us three setting off, Andrea, Davide and Gio, but we ended up being a group of 12 friends and, perhaps because of this, the resulting expedition was perfect. We landed at Marrakech on 15 September and immediately breathed in the new atmosphere, we were guests in a foreign land, a bit hot and disorientated, but happy.

The minibus was filled to the brim with our bags, ropes and rucksacks and as it left the warm and noisy Marrakech it flung itself up adventurous roads with wayside shops, road mechanics, meat hung out in the sun, anachronistic carts pulled by donkeys and people walking, seemingly in the middle of nowhere. In the depth of night, after an infinite number of dusty bends, some frights due to unusual meetings with dromedaries, we finally enjoyed out first evening meal in Morocco with an unfailing cumin soup. On the next day we carried out the last stage of our journey - in truth this was all about to begin - and our gear was carried on the backs of donkeys to Taghia while we finally managed to stretch our legs after too many hours sitting down.

This small village, lost at the start of the canyon and comprised of small houses made of stone and wood, seemed to loose itself into the surrounding countryside of cultivated fields, low prickly bushes and majestic rock faces. We felt at one with this landscape, so different from what were used to. Perhaps it's the intensity of the colours of this compact limestone which excited us most and which reminded us of the real reason of our pilgrimage: to climb. All that was left to do was search, find and climb a new route... No sooner said than done. Well, in truth, not quite...

Even though we were impatient to get started with what would have exhausted us, we were forced to wait because the rain and the recent routes not included in the guidebook served to remind us that projects can be planned, but only up to a certain point. After a couple of days spent repeating some shorter routes and some small walks which enabled us to gain confidence with the rock, and after having checked that all the logical lines had already been climbed, we began to wander about in the search of our "magic but less-logical line".

The rock down there is stupendous and the good company ensured that the climbing was great fun, but we had other things in mind. After 4 days, finally, we decided to start up an improbable, and possibly impossible line... 350 meters of stupendous limestone, overhanging, coloured with buckets of yellow, fiery red and ochre which watched and silently challenged us. The rock still needed interpreting, the best accessible line needed finding, we took our pick and now we needed to rely above all on luck and Giovanni's experience.

The four days which took us to the summit seemed like months of falls and adrenalin, creaking micro friends, airy jumars, extenuating drilling, descents in the light of the moon and moments of indecipherable, injurious rambles aimed at the deaf and rough rock. Every evening our hardship was washed to one side thanks to the strange and slightly nauseous meals, our friends and the laughter which awaited us on our return to the village.

On day 4 the drill ran out of batteries and Davide, armed with headtorch, hammer and pegs, finally equipped the last belay on our new route. Atlante perverso was born beneath a star-less sky, obscured by the light of the full moon, created by the Altroverso Team driven by the simple the pleasure of climbing. As long as you love pumped forearms, razor-sharp holds, smears, the void beneath your feet and the shudder of some difficult obligatory climbing.