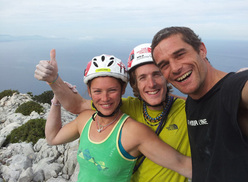 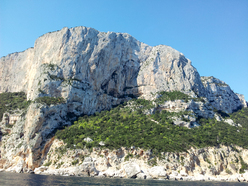 Aria, first repeat in Sardinia by Pearson and Ciavaldini

Caroline Ciavaldini and James Pearson have made the first repeat of Aria (8a+, 350m) established by Pietro dal Prà on Punta Plumare, Sardinia.

They've done it again. After repeating Mezzogiorno di Fuoco and and Amico Fragile at the start of April, James Pearson and Caroline Ciavaldini have recently repeated Aria, another top multi-pitch route in Sardinia. The route in question is located at Punta Plumare, a wildly overhanging cliff located directly above the Mediterranean just south of Cala Gonone, established ground-up in 2006 by Pietro dal Prà. and Lorenzo Nadali, and then freed a year later by dal Prà and Alessandro Rudatis. The 10 pitch, 350m line offers technical difficulties up to 8a+ with some extremely long run-outs; Aria can be repeated with a mere 6 quickdraws, despite some pitches being up to 45m long!

Ciavaldini and Pearson first attempted the route last week but although Pearson made excellent progress on-sighting the lower pitches, he slipped off the soaking first 8a+ pitch before on-sighting his way to the top. "With routes as beautiful as Aria, they deserve to be treated well" was Pearson's comment at the time, and so after waiting out some very rough weather, the French-British duo returned last week for the redpoint, accompanied by the first ascentionist as well as Riky Felderer and Pietro Porro. The ascent ran smoothly, despite the long run-outs, and theirs is the first repeat of what Ciavaldini describes as a route which is "vraiment hyper classe". A truly super class route.

For a full report check out: www.carolineciavaldini.com