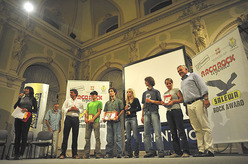 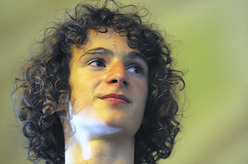 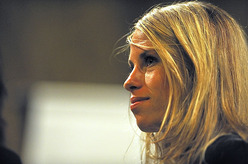 On 05/08/2008 the third edition of the ARCO ROCK LEGENDS 2008 was celebrated in the Casinò in Arco. Adam Ondra won the SALEWA ROCK AWARD while Maja Vidmar won the LA SPORTIVA COMPETITION AWARD.

Climbing is young and dreams of the future with eyes wide open. The Casinò di Arco is still filled to the brim, Adam Ondra and Maja Vidmar are posing for the ritual photos, clutching the climbing oscars they’ve just won. The young climber from the Czech Republic has received the Salewa Rock Award, while the Slovenian champion climber is holding her La Sportiva Competition Award.

Adam’s eyes are those of an extremely young climber, a youngster chasing the dreams only he knows he’s capable of achieving. A mere 15 years of age, Adam has nevertheless already won over the climbing world. Maja on the otherhand is perhaps reliving the final in Kranj, the crux competition which secured her overall victory in the Lead World Cup 2007. It was there that her impossible dream had become a reality, like in all the best sports stories.

Maja and Adam are still smiling, perhaps still somewhat incredulous to have won the award. And they are certainly already thinking about what tomorrow holds in store, the future can be shaped by their hands only. This is the lasting image of the third edition of the Arco Rock Legends, a photo with a multi-coloured background comprised of the hundred of spectators who have just witnessed this climbing oscar evening.

This edition, like the first two, was goverend by an international Jury presided by Fabrizio Miori and comprised of 17 of the most important climbing magazines in the world. During Friday morning’s Jury meeting they chose the two winners and this selection was certainly no mean task: they had to chose from the best of the best.

Patxi Usobiaga was one of those in the running for the Salewa Rock Award. The Basque climber had already won the 2007 edition and this year he had impressed all with his fantastic rock tour which netted him some of the hardest routes in the world and also the first 8c+ on-sight in the history of sport climbing. He was up against Barbara Zangerl from Austria, without a doubt one of the strongest and most motivated boulderers in the world, capable of taking female bouldering into a completely new dimenson.

Chris Sharma was another of the five nominees; for years the young American has been a true on-the-road climber, one who excells in all climbing disciplines. This style is similar to that of fellow countryman Dave Graham, the authentic explorer of what is physically possible on short boulder problems and at the best crags in the world.

But in the end the award went to him, to Adam Ondra. With his 15 years of age he is the youngest, in some respects also the hardest to decipher with all his immense class. His talent is almost boundless, nigh “incomprehensible” and it is this which amazed took the world by storm in recent times. Adam excels at the crags, on boulder problems, on multi-pitches and also in competitions: just a few days ago he was crowned World Champion in his Youth B caegory. Ondra “represents today’s certainty and tomorrow’s dream” is what the Jury wrote. A dream, we feel we should add, seen through the beautiful eyes of of someone whose hopes turn into reality.

The same impossible hope that lights up the eyes of Maja Vidmar everytime she remembers those splendid 6 stages in the World Cup 2007. She won against all odds, her overall victory was beautiful, a true undertaking. It came as no surprise therefore that the Jury assigned the La Sportiva Competiton Award 2008 for her ability to “better herself still.” This ability evidently helped her in some way since this time she was up against two true champions in the form of Kilian Fischhuber and Patxi Usobiaga. Fischhuber is perhaps the athlete who more than anyone else has left a mark on international competitions in the last couple of years, while Patxi was once again the only athlete to have been nominated for both awards.

It was a great moment when all these champions walked up onto stage to talk to Kay Rush, as always a perfect and passionate host for the Arco evening celebration. It was nice to think that the future of climbing had been rewarded; apart from Adam Ondra, Maja Vidmar and all the other top climbers, this is exactly what was felt in the great celebration hall, filled to to brim with climbers. Yes, the future of climbing the transforms into reality.