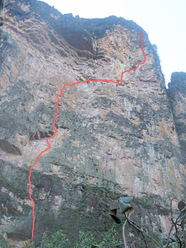 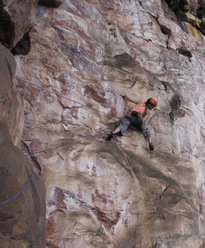 John Arran and Anne Arran have made a remarkable first ascent of Amurita E7 6b on the remote Amuri Tepui wall in Venezuela.

The British climbing couple John and Anne Arran have just returned from another trip deep into Venezuela's jungle where they carried out the first ascent of Amuríta E7 6b, a route which takes a line to the left of an unnamed 600m waterfall on the remote Amurí wall.
Adventure was top on the agenda for the Arran's as the two reached the base of the untouched face after a Cessna flight and a grueling 4 day approach trek through the jungle, aided by local Tepui Indians. Once established, the duo remained in perfect isolation and spent a total of seven days on the wall, climbing in remarkable style and with total commitment.
Banking on all their previous big wall experience, the 10 pitches were all climbed on-sight except for the "frustratingly close failure on the top pitch blank section" which forced John to return to the belay and scope a different line. The duo made use of 2 portaledge camps and placed a mere three hand-drilled 6mm bolts and two pegs (subsequently removed) to back up belays which were not up to standard. John explains the choice "I don't like using fixed gear in Venezuela as much of the challenge for me is in climbing the pitches without it. I wouldn't have used any fixed gear to protect the climbing. But some belays weren't well supplied with natural gear so we chose to reinforce the occasional one to make sure. The decision was made a little easier since we planned to abseil down the line of ascent and were therefore never going to be able to leave the line totally clean anyway."
The Arrans are no newcomers to big walls in remote places, and jungle adventures in Venezuela have resulted in new routes such as "No Way, José" (E7 6c, Cerro Autana, 2002) "Pizza, Chocolate y Cerveza" (E6 6b, Acopántepui, 2003) and the 2005 creation "Rainbow Jambaia" E7 6b up the immense Angel Falls. Compared to all these, Amuríta however was "much more off the beaten track and much more isolated with a team of only two. We're quite used to being dependant on each other, having done big routes in many remote places, but being literally days from the nearest person and with no satphone we needed to be pretty sure of everything we were doing."
When asked what draws them back to Venezuela again and again, John replied convincingly: "If you'd climbed there you'd certainly understand the attraction. Amazing landscape & people, untold rock potential, all hard with enough gear to climb trad (so far!), and every time a new adventure!" Talking of which - some pitches are given a J grade... for the nature of the overhanging jungle vegetation!
Amurita E7 6b
Amurí wall, Venezuela
John & Anne Arran, 09/2008
E4 6a, E5 6a (&J4), E5 6a, E6 6a, E5 6b, E6 6b, E7 6b, E5 5c, E5 6a, E4 6a (J3)