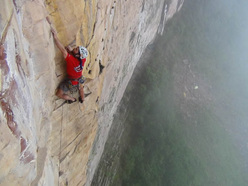 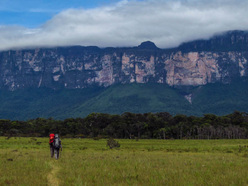 On our way to Amuri Tepuy. The Tuyuren Waterfall can be seen.
Photo by Favresse archive 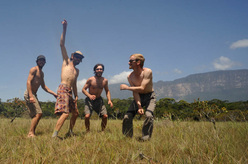 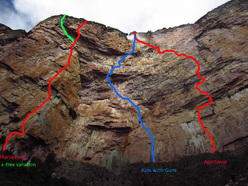 When we first came out of the jungle directly to the base of this wall, it looked so overhanging that gravity felt heavy in our minds. We were really not sure whether free climbing this wall would be possible and even more in the style we had committed ourselves to approach it. From the ground we could see almost no real obvious lines, very few cracks and the wall is relentless steep... Definitely the steepest I have seen of this size. Our friends Mason Earle (US), George Ullrich (UK), Siebe Vanhee (BE), Sam Farnsworth (UK) had 10 days head start and were already quite high on one of the obvious lines in the center of the wall. It was pretty funny because it was a real coincidence. We are all good friends and both teams decided to go to the very same place without knowing we had the same plans!

Maria Rosa 7b 500m no bolts, no pitons, no rap stations
The right side of the wall looked almost impossible, in the middle the other team had taken the main line (which looked quite impossible, too!) so we decided to try a route on left where we spotted an appealing line. As we climbed our first pitches we realised that the climbing here is completely different from the big wall climbing we were used to. It's steep, very featured but mostly with horizontal holds so it's very difficult to anticipate what's next. Mostly you just have to commit to sections and hope for the best. Traversing was often the easiest and most tempting solution instead of climbing straight up into the unknown.

The climbing was steep and adventurous but this rock is so featured that the climbing, although quite sustained, went easier than we had expected. In a mere 4 days we climbed all the way up to the base of a massive roof, only to find a perfect 10m roof crack with about 400m of pure exposure. We were super excited but unfortunately this crack was gained by a one-move boulder problem which shut us down and didn't allow us to free it. But the roof crack was so beautiful and unreal that we still played on it for a couple days, just for fun. Then when we got ready to push for the summit we split into two teams: one went around the roof to establish a free variation, while the other finished the most logical, original line.

We hauled all our gear to the top of the wall and hung out a full day on top of the tepui to enjoy the beauty of this magical place. The next day we descended down the left side of the wall via the Venezuelian route "Wacupero Amuri" which allowed us to leave absolutely nothing behind on our route. We called this new route "Maria Rosa", after some local cookies called Maria which occasionally surprised us with their strawberry filling. So the route has two exits. One all-free avoiding the roof with 3 long pitches traversing left and then continuing up to the summit, and the other which exits straight up through the roof with a few aid moves of C1.


Apichavai 8a+ 500m 5 bolts
When we came down from Maria Rosa we made a quick trip back to Yunek to get more food. There we met with the other team on their way back home. We had seen them climbing next to us the whole time but we hadn't managed to communicate because of noise of the waterfall. They motivated us to try to free their line "Kids with Guns" up the center of the wall which they thought could go free, but as we returned to Amuri, adventure called us to explore another new line, this time on the right up what was highly likely to be impossible!

Only the first two pitches seemed fairly obvious and not too steep, while the rest resembled an overhanging Quartzite ocean. We encountered difficulties right away with hard pitches, vegetation, tricky protection and loose blocks. On an attempt to redpoint the second pitch Sean Villanueva took a 40m fall, ripping 5 pieces of gear, three of which had looked perfect except for a bit of dirt. Thankfully the ground was still 20m away and the wall is so overhanging the only thing you can hit is air. But Jean-Louis who was belaying got some very bad rope burns on both hands; for a moment we were not sure whether he should stay or go home to avoid serious infection. But after 4 days it started to look better so he decided to join us on the wall, but without being able to climb.

Many other falls were taken on this climb, around 20 between all of us! On pitch 4, 6 and 7 the route climbs through the most overhanging section of the wall and those were the hardest pitches to free climb, with difficulties up to 8a+. We only managed to on-sight 4 of the route's 15 pitches, while the rest were hard and required cleaning and aiding in order to explore and study the pro before the free climbing.

What was most amazing though is that we found a line that goes free, and many sections were only possible due to just a single hold which made all the difference. During out last 4 days on the wall we thought we'd reach the top that same day, but we got shut down by unexpected hard sections which needed working, cleaning and redpointing. It seemed as if we were never going to get to the top and amazingly the wall didn't let go until the very end. We were really not sure whether we would actually make it! This is the first time this has happened to us. But finally we reached the dense summit vegetation: we were on top of Amuri for the second time!

We placed a total of three lead bolts and two bolts to reinforce two anchors. The route took us 14 days in total, 4 of which were spent on the ground waiting for Jean-Louis' hand to heal. The difficulty is very sustained with 8 pitches 7b and harder! "Apichavai" is the name of a warrior who lived in Yunek and finally managed to kill the "Tri Tri", a giant bird who caught people and ate them high up in a cave on the Tepuys.