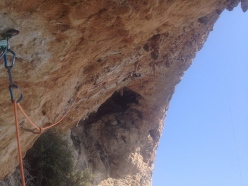 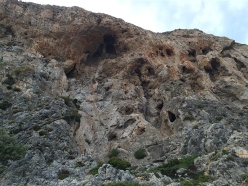 In May 2015 Michael Kemeter, Jürgen Reinmüller and Roger Schäli made the first ascent of Alpinstil (7c+, 135m), a new multi-pitch climb route on the island of Telendos in Kalymnos, Greece.

Good and bad news from the island of Telendos. Let's start with the bad: the bolts on the highly popular multi-pitch climbs Wings for Life and Wild Country are currently considered dangerous and climbers are urged not to repeat them for the time being. The good news: by the end of the year these two climbs will be rebolted, thanks to the recently approved EU rebolting program.

The other good news is that the hallmark peak on the small island opposite Kalymnos now hosts another new route, since it’s precisely here that in early May Mich Kemeter, Jürgen Reinmüller and Roger Schäli put up their Alpinstil. The new route was established ground-up and breaches the huge Inspiration Cave with difficulties up to 7c+. Given the runouts between the bolts, falls up to 15m need to be taken into account.


17/05/2005 - Kalymnos rock climbing in Greece
Rock climbing on Kalymnos in Greece is simply a dream come true! Awesome limestone crags, stunning routes, a relaxed holiday atmosphere, the warm Aegean sea to dip into after a hard day on the rocks, legendary Greek hospitality and cuisine..