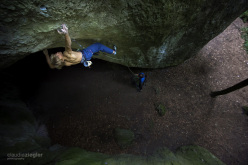 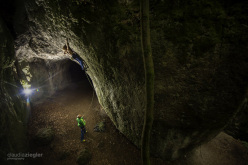 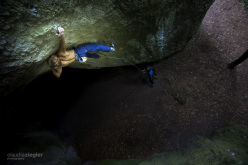 On 10/09/2014 Germany's Frankenjura Alexander Megos made the first ascent of Geocache, repeated Action Directe 9a and climbed Sundance Kid 9a.

Yesterday German sports climber Alexander Megos had, in his own words, a "pretty good day" in the Frankenjura. Read the first ascent of Geocache, followed by a repeat of Action Directe 9a (first-go, and the 4th time he's climbed this route so far) and an ascent of Sundance Kid, a former 8c that after a broken hold now checks in at 9a. Yes, definitely not a bad day.

Geocache in particular is worth focussing on: this line had been attempted by Michael Kaiser before he declared it an open project for everybody to try.. When Megos first checked out the moves he felt it would go pretty quickly, in about 3 or 4 attempts, but things turned out somewhat differently.

"I have to admit the climb got me pretty worked up. It's got one really strange move from which I kept falling off, really bizarre, if you're 2 cm taller then perhaps it's really easy, who knows.. When I finally stuck it on my third day, I actually fell off higher up. Three times in total! In the end what I thought would take just 3 or 4 attempts and a single day turned out to be more than 40 attempts spread out over 6 days!"

Regarding the grade, Megos is hesitant, preferring to say "if it weren't for that one move the route would be quite straightforward, but it's there and that's what made Geocache so different for me. It's not an extreme route, just really bizarre." It’s worth noting that 40 attempts and 6 days is the most Megos has ever worked a route, indicating that Geocache isn't exactly a walk in the park.

Talking about walks: the route is located in the Vogelherd Grotte, a popular spot with walkers who stroll through the cave and also with Geocachers, GPS treasure hunters who kept entering the cave asking for the container. For those wishing to located the cave and container, the coordinates are as follows: N 49.634386, O 11.594101.