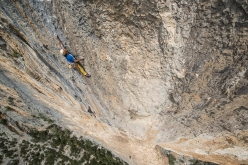 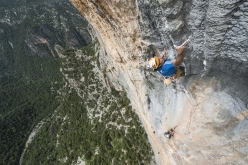 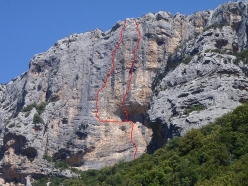 In January 2016 Alexander Huber made the first ascent, alone, of Onda Azzurra up Monte Donneneittu at Codula di Luna in Sardinia. 240m high and with difficulties up to 8a+, this multi-pitch sports climb was freed by Huber together with Michael Althammer in April 2016.

Alexander Huber evidently has a penchant for the Italian island of Sardinia. After his difficult deep water solo Il Capitano at Capo Monte Santo, located along the beautiful coastline between Cala Gonone and Santa Maria Navarrese, the German rock climber and alpinist now checks in with a difficult new multi-pitch sports climb on Monte Donneneittu at nearby Codula di Luna. The new route is 240m high and was established alone and ground-up at the start of 2016, and freed together with Michael Althammer past 8a+ difficulties. Onda Azzurra (blue wave) tackles the bulging overhangs head-on. In 2014 Huber had intended on climbing these with Althammer but the 46-year-old at the time opted for the line of least resistance, traversing wildly leftwards to establish Mare Grigio (240m, 8a). The climbs start to the left of Amico Fragile and to the right of Angelo Assassino.

At the end of January I had two weeks off. Time for a holiday in Sardinia. I was certainly the only tourist in the small mountain village of Baunei at that time, but the winter was perfect. Pleasantly cool, but certainly not too cold. Just one day with strong winds, but otherwise the weather was almost always calm with blue skies. It couldn’t have been better. Especially since it was January! Where else can you climb this well at this time of year?

I spent four days climbing to find the direct way through the face. My soloist (a device used for rope soling, Editors' Note) is a tried-and.tested, calm climber partner, enthusiastic about the setting it was in. The rock was a dream, with far more features than I had expected, meaning that at times I could dive upwards, safe in the knowledge that sooner or later I’d find a good handhold. Even as I climbed through the blue wave, the Onda Azzurra, i.e. the last striking overhang. The most beautiful hold on the face though is the fat juniper, which somehow has managed to root itself into the seemingly nothing. A real throne, with 200 meters of void beneath you, if you decide to sit on it.

I returned to the base of Onda Azzurra in April, but this time I wasn’t alone. Michael Althammer had happily joined me and we had a great time. A bit of sea, some time spent hanging out at the bar and pizzeria and, above all, lots of steep rock. This is what Sardinia is all about. And in the end I even climbed the blue wave!


04/11/2008 - Alexander Huber interview
Interview with German climber Alexander Huber, one of the world's most important sport climbers and mountaineers.