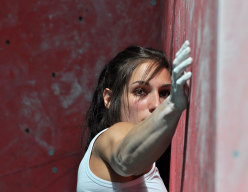 In June this year American boulderer Alex Puccio suffered a crippling knee-injury that forced her to skip the rest of the Bouldering World Cup 2015 yet now, after difficult rehabilitation and despite not being fully recovered, she is currently taking female bouldering by storm. Climbing with a knee-pad to protect her ligaments, in just over two months the 26-year-old has sent a staggering four 8B boulder problems heralding an intensity and consistency never seen before.

Puccio’s bouldering spree started in mid-September when she sent Irreversible at Rocky Mountains National Park, and this was followed by the nearby Don't get too greedy, Free Range at Boulder Canyon and Dark Waters at Clear Creek Canyon. A flurry of 8A+ and 8A need adding to the list, including the important flash ascent of Mysterious ways, a problem originally graded 8A+ which she feels is 8A.

In August 2014 Puccio climbed her first 8B+, Jade at RMNP to add her name to the small but fast growing list of female climbers capable of sending this grade, and a month later she repeated this startling performance by sending The Wheel of Chaos.