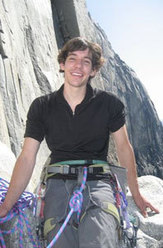 Sooner or later it was bound to happen: Gaia, one of the most emblematic routes on British gritstone, has been flashed for the first time ever, at the hands of visiting American climber Alex Honnold.

For those unsure as to what this coveted ascent means, here's a little explanation that puts things into perspective: Gaia was established way back in 1986 by gritstone master Johnny Dawes and takes a bold line up a shallow hanging groove before breaking out right to the psychological crux, a series of slopers and smears which lead delicately to the arete. Dawes led the route in a moment of true inspiration after having briefly abseiled down the Groove and ignored the crux mantle exit, a nigh faultless style of ascent which in its 22 year history only Honnold has been able to improve on.

The 23 year old Californian commented on 8a.nu after the ascent: "Not a true onsight since I've seen movies, but there was no chalk". Honnold is currently in England together with fellow climber Kevin Jorgeson and the young Americans are certainly climbing some of the biggest routes on gritstone in fine style, such as Jorgeson's recent first-ever ground-up ascent of an E9 (The Parthian Shot) and their 2nd and 3rd ascent of James Pearson's "The Promise" which, with crashpads for protection (unlike Pearson), they feel weighs in at E8.

For the record, gritstone E8 has already been flashed, notable examples include the flash of Carmen Picasso E8 6c at Gorple by both Ben Bransby and Jordan Buys (the former after having watched Dave MacLeod, the latter with 1 pre-placed nut) and Ryan Pascal's 2006 ascent, after having watched a friend climb the line, of 'End of the Affair' E8 6c at Curbar.