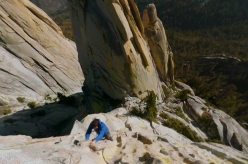 Alex Honnold climbing at The Needles

American rock climber Alex Honnold solo climbing at The Needles in California, USA. The VR footage offers a 360° view and gives the sensation of actually being there.

California’s The Needles are one of the most evocative places to climb in all of the US. Yet despite being steeped in climbing history and offering an abundance of quality routes, these golden granite, lichen plastered spires located high up in the southern Sierra are climbed rarely.

In this video top American rock climber Alex Honnold introduces the area, as well as talking about his solo climbing. Honnold also attempts to explain why others find it hard to fully understand his free soloing feats: "I think the reason people have a hard time understanding hopeless climbing is because they can’t imagine how comfortable I feel doing it. They can’t imagine feeling secure in that position, they can’t imagine feeling comfortable holding on. So the important thing is to make people understand that I feel safe and secure, and that it feels easy."

This obviously doesn’t mean that this is a game for everyone, on the contrary! All it means is that Honored experiences these ascents in a totally personal and almost unique manner, i.e. as an absolute world class ace.

It’s worth noting that this VR film is a unique experience, a sort of virtual reality that enables to explore the 360° panorama and Honnold’s climbing. Move your mouse over the fil to discover the unique atmosphere, rocks and climbing at The Needles.