Adam Ondra on his new project at the Flatanger cave in Norway.
Photo by Ove Magne Ribsskog 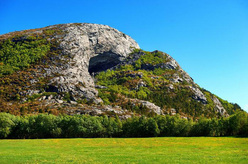 Video of the future 9b project bolted by Adam Ondra at the Flatanger cave in Norway, where he on-sighted another two 8c+ and made the first ascent of a 9a+.

The nth 8c+ on-sight by Adam Ondra. According to some sources, the Czech phenomenon has already reached double numbers, or rather with his latest sending spree the 19-year-old has already on-sighted eleven 8c+, thanks to Eye of Odin (freed just a few days ago by Ethan Pringle) and Nordic Flower (ex 9a now 8c+ put up by Jorg Verhoeven) at the Flatanger cave in Norway.

It's clear that for Ondra 8c+ on-sight and 9a redpoints have become a standard. so much so that many no longer consider this news. But until the others don't manage to equal this performance (Patxi Usuobiaga and Ramon Julien Puigblanque excluded, seeing that they're the only others to have on-sighted up to this grade) than 8c+ on-sight remains ground-breaking news.

Talking of which, the other day Ondra also made the first ascent of Thor's Hammer, the first 2/3 (read 2 of 3 pitches linked into one) of a mega Magnus Midtboe project. Another 55m which equate into another 9a+ for Ondra. But quite frankly, for routes of this grade (i.e. 9a or 9a+ redpoint in a brace of shakes) we're not capable of providing Ondra's track record!

In this video Ondra attempts a new project he bolted at Hanshellern, also known as the Flatanger cave. A probable 9b and "one of the hardest in the world. Perhaps the hardest." Time will tell.