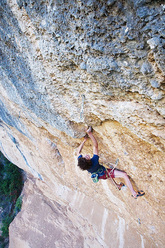 Adam Ondra climbed in Margalef, Spain, for a week where he repeated Coma Sant Pere 8c+ and Era Bella and Gancho Perfecto 9a. Vojtech Vrzba provides the details.

"We stayed in Margalef fo 6 days. Adam tried to on-sight "Coma Sant Pere" 8c+ (45m long and 20m overhanging)... he failed at the very top as the rain had washed away all the chalk and he couldn't find a hidden pocket. He then managed to send it Second go.

We returned to the same sector two days later together with Chris Sharma. Adam was intent on trying "Era Bella" 9a... he gave everything he could to OS this route but in the middle he tried to hit the non-obvious two-finger pocket with three fingers and fell. He then found easy beta through the crux but got a bit lost at the end because of non-chalked holds and pockets. His successful second go wasn't as fluid as the first and he commented the he had been "way more pumped than during the on-sight, but I somehow battled my way up". While Adam fought his way by Era Bella, Chris tried his amazing looking project to the right with a couple of dynos and monos at the the crux!

The next morning Adam also sent "Gancho Perfecto" 9a (he reckoned it might even be 9a+ as the finish on the edge is a killer) while in the evening he "played around" on another Sharma masterpiece, First Round First Minute at El Laboratorio. Conditions were fine that evening (strong, cold wind) but the next evening, after having rested all day, conditions were completely different and horrendous. Adam decided to check out the moves once more to remember them, then left Margalef."