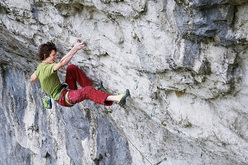 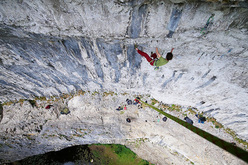 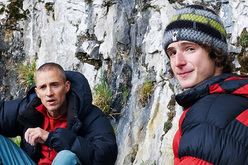 During a quick visit to Britain Adam Ondra made the first repeats of two Steve McClure testpieces: Overshadow 9a+ and Rainshadow 9a at Malham Cove. At the same crag the Czech climber also carried out the first on-sight of an 8c in Britain, Bat Route.

"There is no stopping him. He is quite inspiring. Whatever the level I am climbing at, Adam is blatantly way better, a full 2 grades better and it makes me want to get my finger out and get some stuff done!"

This is Steve McClure's conclusion after watching Adam Ondra during his second visit to the UK, during which the Czech climber carried out two long-awaited second ascents of McClure's testpieces at Malham Cove, Overshadow 9a+ and the nearby Rainshadow 9a.

Ondra's success on Overshadow came about on Monday after seven days of effort diluted over two years, seeing that he had attempted and subsequently abandoned the line in May 2010 in favour of two important first-repeats, North Star and Nothern Light. Both routes are at Kilnsey, both are graded 9a and yes, both were freed by Steve McClure.

Rainshadow also received its first repeat since being established in 2003, staying dry despite heavy rain. What is just as noteworthy - if not more - is Ondra's on-sight of Bat Route, established by Mark Leach back in 1989 and now the first-ever 8c in the UK to be on-sighted.

Prior to leaving Malham, Ondra also got close to making the first repeat of Total Eclipse, John Dunne's 1995 masterpiece but he slipped off after the crux on the blatently wet upper section. There is no doubt - McClure confirmed - that he would have succeeded had it been dry.

Ondra's return journey home today took him via the third crag in Britain's hardcore trilogy, Raven Tor in the Peak District. Unsurprisingly the youngster had his sights set on Ben Moon's 1990 milestone Hubble, but this morning was Ondra's fourth day on in a row and even he is human after all! Which means that the world's first 8c+ still awaits its first repeat from a foreign climber!

No doubt the McClure - Ondra Leitmotiv will continue for quite a while yet, especially since "strong Steve"as he is affectionately known on the other side of the Channel. is back on form after a finger-injury. Progress on his new mammoth Malham project looks promising and motivation certainly isn't lacking now...

For a detailed report of Ondra's trip check out Steve's blog, for more information about Hubble enjoy this interview with Steve and to get an idea about the routes at Malham, watch the video below