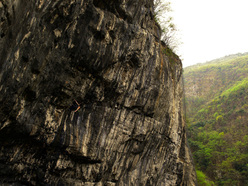 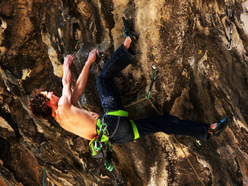 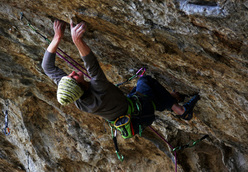 Adam Ondra freeing the as yet unnamed 8a at Arco.
Photo by Inka Matouskova

The report by Adam Ondra who on-sighted Bella Regis 8c+ at the Italian crag Bus de Vela on 7 April 2012.

As usual the news made it's way across the globe in an instant: Adam Ondra had succeeded in on-sighting another 8c+. This time not in Spain, but in Italy, at the difficult crag Bus de Vela which had been discovered a long time back by Roberto Bassi and developed in recent times by a strong group of young Italian climbers spearheaded by Gabriele Moroni.

Moroni left his mark at this crag by freeing, amongst others, two superb routes, Il Frutto del Diavolo 8c+/9a and Bella Regis 8c+, and it was with these in mind that Ondra travelled to Italy two weeks ago. The result is remarkable: one 8c+ on-sight (his second in Italy after L'Avaro at Tetto di Sarre and, as he points out, his first placing the quickdraws), two 8c on-sights, a titanic battle (lost, for now) on Frutto del Diavolo and the first ascent of a 9a bolted by Loris Manzana at a crag close to Arco. Here's the report the 18 y-year-old sent us, which touches on these crags and routes as well as the importance of listening to your body.

Bus de Vela is very impressive crag with an absolutely unique style of climbing. Despite its rather random and dirty surroundings, the quality of its rock is awesome and it naturally creates holds that aren't found on limestone very often, including slopers and weird opened pockets. The routes are very complex and require everything from endurance, bouldering power and technique. I was blown away, but it is worth of going there only for those who climb at the highest level since the easier routes aren't as good.

When I first arrived I thought that on-sighting would be difficult here and I had quite a hard time in the 7a+ and 8a warm up. The the moment came for Bella Regis: the first part (7c) went quite badly and I messed up the sequence, but I climbed fast up the rest of the route, fought through the crux and managed to on-sight my first 8c+ while clipping in the quick-draws.

Regarding its grade, I am not really sure. In almost fell off two moves but I was lucky enough to stay on, and when I reached the top I wasn't as pumped as much as would have thought. I don't have recent comparisons to go by as I haven't been on-sighting much of late and don't know if I really am as on form as I think and hope. But before this trip I sent a training link-up somewhere in 9b range in my home climbing area at Holstejn, Moravsky kras and also on-sighted Iluzija 8c and came desperately close to an 8c+ at Kotecnik in Slovenia.

I finished the trip by freeing a 9a bolted by Loris Manzana located close to Arco. It has a bouldery section at the beginning and a pumpy finish. I sent the whole route in a day, including cleaning and figuring out the beta. I have some doubts about the grade as the route isn''t fully cleaned yet and footholds are still popping off, which made the ascent a bit awkward. But I am sure it won't be significantly easier than 9a.

During this trip I tried two 8c's and did both of them, but I certainly can't state that I can do all 8c's on-sight. In general though, if a route is long and without extremely tricky sequences, then the chances are quite high that I'll succeed. On these two routes in particular, the conditions were excellent: about 10 degrees, cloudy and surprisingly dry rock for the season. In general, in on-sights conditions tend to be less crucial than in redpointing, simply because the moves are not as extreme and you always need to take your time to inspect the terrain above, while shaking out and chalking up.

Talking of time: just like last year, this year I took a break off climbing. Again, it was hard to keep myself from climbing, but I then started training with an even bigger psyche than before. Apparently this is my problem: I need to be tired in order to feel like I'm training, but crushing yourself is certainly not the best way to train. I risked doing this in January but I am learning, slowly but surely, to listen to my body.