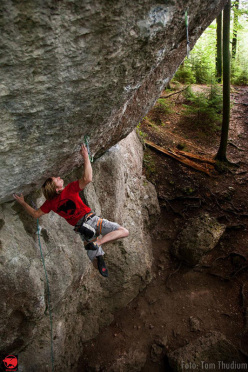 On Thursday morning German sports climber Julius Westphal repeated Action Directe, the masterpiece freed by Wolfgang Güllich in 1991 at the Waldkopf crag in Germany’s Frankenjura. Over time this intense series of one and two finger pockets has become one of the most coveted hard sport climbs in the world, but also one of the most difficult of its grade, seeing that in almost a quarter of a century it still counts less than 20 ascents.

In the past the 28-year old had climbed two 9a’s, both first ascended by himself, namely Aloha at Kronthal in France’s Alsace region in 2007 and Gegen den Strom at Buchholzfelsen close to home in the Pfalz region last year. Recently Westphal repeated I bleed black, a 11-/11 put up by Markus Bock in the Frankenjura and seeing the speed with which he dispatched the line, he decided to inspect Action Directe more closely.

It’s worth noting that, contrary to most, Westphal had no difficulty with the bouldery start - the dyno to the two finger pocket - but with the relatively easy exit… To find out more check out this interview