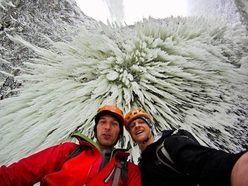 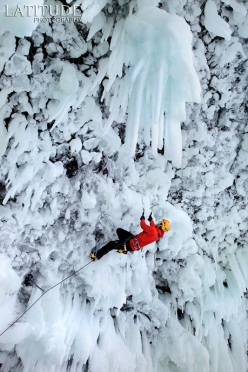 Tim Emmett during the first ascent of the mixed ice fall Spray On... Top! (230m, W10, M9+) at the Helmcken Falls, Canada.
Photo by Wiktor Skupinski

PORTFOLIO / gallery Portfolio: Wolverine and the first WI 11 in the history of ice climbing

A brief analysis of the new grade WI 11, put forward for the first time in February 2012 by Klemen Premrl and Tim Emmett after having freed the single pitch ice climb Wolverine at the Helmcken Falls (Canada).

The first time we heard about the Helmcken Falls in Canada was at the start of 2010 when an incredibly motivated Will Gadd told us " I'm just back home after climbing the coolest ice I've ever seen or climbed, anywhere in the world." Seeing that they came from one of the world’s premier ice climbers, these words couldn’t fall on deaf ears and in the interview that followed Gadd explained in detail all the novelties, talked about that enormous overhang climbed ground-up and protected with bolts and he also told us about the improbable spray ice which formed thanks to the nearby waterfall in drips, mushroom and other bizarre blobs of ice.

This new "ice arena" immediately enabled Gadd and his British climbing partner Tim Emmett to do something they’d never done before: climb ultra-steep terrain with ice axes and crampons, not up rock like in drytooling, but on pure ice. A playground which was so new that it defied comparisons, so different that even the difficulties of the routes were immediately "important": WI 10. WI 10? Yes a grade which wasn’t merely completely new, it was also an enormous leap from the maximum difficulties which, up to then, had been in the region of WI 7+ of which there were only a few rare examples worldwide. The logic behind this grading was that these new routes weren’t necessarily more dangerous than others, on the contrary, but they were "merely" more difficult physically. And, to a certain degree, comparable in terms of difficulty therefore to an M10 mixed or drytooling route, though completely on ice. Hence the grade WI 10.

Two years after this "discovery”, in February 2012, Tim Emmett and Slovenia’s Klemen Premrl managed to free Spray On... Top!, 230m with difficulties up to WI 10, M10+ which translated into one of the world’s most overhanging multi-pitch ice climbs. The Britain was so enthused about the ascent that he described Spray On as "the most outrageous climb of my life" and the cave as "the future, for those that want to adventure into it…" Before venturing out of it though, Emmett and Premrl also freed Wolverine, a single pitch climb so difficult as to merit the grade WI 11. The hardest ice climb in the world? Possibly… and this is why we wanted to find out more directly from highly talented Klemen Premrl, currently the only person to have climbed both WI 11 and WI 7+ ice!

WOLVERINE and W11 by Klemen Premrl


As far as I know, there are no WI8 or WI9 routes out there, but I might be mistaken. In truth I can’t really compare Wolverine to Leichtfried’s Centercourt WI 7+ or Gadd’s Second Choice WI 7+, or for that matter any other ice route that I’ve climbed so far. Wolverine is simply so different and much, much harder. You can only compare it to Spray on WI10. And you can also compare the difficulty of Wolverine to other mixed routes in the range of M 11.

The climbing style is closer to that of mixed routes, but this certainly doesn’t make Wolverine a mixed route, it is still a proper ice climb. It’s protected by bolts and this removes some of the seriousness of the climbing, but you still climb ice and this, at least to me, makes it an ice climb. Every single move or placement is on ice, so the most obvious thing is to choose ice grading system (WI). Grade 11 is a bit controversial, that is true, but Wolverine is physically much harder than any other ice route I’ve climbed so far!

In short: Wolverine is bolted route, graded WI 11. Which means that the route is an ice climb, protected by bolts, and that the climbing will most probably feel harder than Spray on, and as hard as some M11 routes... that’s all there is to it! You can only climb a route, not a grade. Will Gadd summarized it all perfectly: "At the end we always come to one simple point: They are what they are, and if you are up to the challenge you will do it, and if you are not, you will fall off, and that is enough for me."