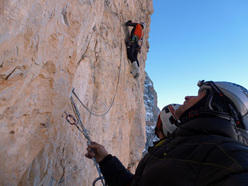 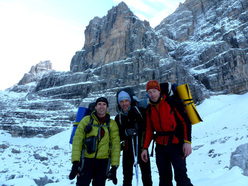 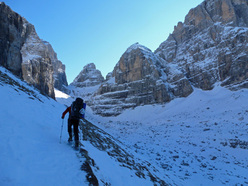 Via Cembridge, first winter ascent by Giupponi, Larcher and Leoni

The idea took shape last autumn, the weather window arrived on 25 Janaury and the Italian alpinists & policemen Luca Giupponi (Moena alpine school) and Rolando Larcher, together with Fabio Leoni, certainly didn't wait to be asked twice: theirs is the first winter ascent, and first on-sight, of Via Cembridge on Cima Margherita in the Brenta Dolomites. Established during the summers of 2003 and 2004 by the three policemen Andrea Tomasi, Maurizio Cramerotti and Bruno Moretti and dedicated to Stefano Gottardi of Cembra who died in 2002 during a rescue mission, the route follows a beautiful 550m line through the centre of the imposing wall, with difficulties up to 7b+ (6c oblig). Until the January ascent, the route had been repeated perhaps only three times, never free, and these all confirmed the demanding nature of the climbing.

After the long approach and after having climbed the first three pitches and fixed ropes, the trio bivied at the base of the wall, poised for the climb early the next morning. The experience proved both committing and fantastic and Larcher - someone who certainly knows the Brenta Dolomites like the back of his hand - told planetmountain "Cima Margherita was a revelation and surprise. I've always seen it but never considered it because in the vastness of Val Brenta its 500 meters seem to shrink in comparison to Crozon and Tosa. In truth it's like Cima Grande di Lavaredo, just as overhanging, but with decidedly better rock."

It is worth noting that Larcher on-sighted all the pitches during day 2 and this performance is worth underlining, given the intense cold, the technical difficulties and the committing nature of the route due to the long run-outs. "I obviously set off to on-sight as much as possible, but given the temperatures this seemed a tough task" explained Larcher who added "But thanks to my ability to adapt to the cold, my experience and renowned luck, with great satisfaction I succeeded in the on-sight. I climbed all pitches, apart from the 7b+, with gloves which every now and then I close to warm my fingers.

Larcher, Giupponi and Leoni stopped 20m short of the summit due to the imprecise topo and the onset of nightfall, and they wisely decided to abseil off which proved an adventure in its own right. Fortunately though things turned out for the best and they safely returned to their bivy for another "snug" night. The report by Luca Giupponi.


VIA CEMBRIDGE, FIRST WINTER ASCENT IN THE BRENTA DOLOMITES
by Luca Giupponi

I'd been thinking about doing a winter ascent for quite a while. I spoke to Rolando about it this summer, while climbing together in the Brenta Dolomites, time flew and then, in December after a fatastic day climbing outside I got a message...

January, a cold wind blew for three days, the weather forecast has predicted a cold spell but as of 26 January both the temperatures and the wind should ease up. We trusted the forecast and on Wednesday morning, Rolando, Fabio and I set off on foot from Campiglio, loaded with three heavy rucksacks. We ascended to Rifugio Brentei, right in the heart of the Brenta. The sun greeted us, only to disappear behind Cima Crozzon. We strapped on our snowshoes and ventured into the Brenta Valley and headed to Cima Margherita; the steep north face was our objective.


We all feel very attached to the Brenta, this are the mountains of us Trentino folk. We feel at home here and everyone has his own recollections and memories. We make slow progress, but fortunately, the steep slopes of Val Brenta are fairly clean because it snowed little this year and the strong winds blew what little there was down into the valley, where we sunk in deeply at every step. In winter the steep faces stand out even greater than in summer, they seem even higher, even more perfect. We reached the base in 5 hours, fairly exhausted, with temperatures down to -10°C.

We immediately realised that our original plan to climb the first 6 pitches to a ledge needed changing. It was too late to climb up there with the gear, there was simply too much snow and, seen from down below, it looked less comfortable than we had hoped. So while Rolando and I fixed the first three pitches for the following morning, Fabio remained at the base of the wall and prepared our bivy. When we returned we first came across a small path, then three steps which led to a spectacular bivy, a balcony with view onto Val Brenta. Fabio was busying away with the stove and complained about a pain in his neck. During the afternoon, while digging out the bivy, he'd been hit by a stone, but luckily he'd been wearing his helmet. Apart from the top of his helmet completely split in two, he didn't seem any more worse for wear than usual...

For dinner we had some dried food which, with hot water, took on considerable shape and size. We finished our portions, laughed at our full, swollen bellies and in the evening the wind picked up... The bivy was perfect and after deciding on our plan of attack, at 20.30 we snuggled up in our sleeping bags along with our boots, gloves, cameras and gas canisters and fell asleep beneath the stars. In the dark of the mountains, away from the disturbing city lights, it seemed as if we could reach out and touch them.

I watched the shooting stars fly across Crozzon and disappear towards Madonna di Campiglio. We were close to civilisation yet at the same time distant, isolated in a severe environment. In winter you have to be completely self-sufficient, the environment reigns supreme, and perhaps this is the most fascinating aspect in being here, perhaps this was exactly what we needed.

We woke up at 5.30, breakfast was offered by Rolando - a mixture of cereals, dried fruit, powdered cappuccino, milk, sugar... simply spectacular. He told us that with this we'd be fine for the rest of the day, we couldn't help but agree! Despite it being -12°C we started to sweat due to the heat produced by this magic potion!

We climbed the fixed ropes, two of us had to share the jumars (we'd only brought two pairs) and obviously our ropes got stuck in a corner so our shouts woke up Val Brenta... and we lost precious time. The sun started to rise on the facing walls, while we were on the North Face. The slabs eased off and the overhangs began, our hands continued to scream and each time the blood returned it seemed as if they'd explode. We massaged our feat at each belay, if there was snow we'd carefully put on our boots, trying hard not to drop anything. The temperature was well off the recommended 8°C needed at a crag, at least 16°C colder. But despite the cold Rolando climbed li a steam engine and managed to on-sight the entire route.

We continued to climb until late afternoon, two pitches short of the summit we abandoned our packs on a belays to pick them up during the descent, but we forgot our pegs. Unfortunately 20m below the summit we got caught up by darkness and the route finished up a snowfield and the belay was probably buried beneath the snow. It was at this point that we remembered where our pegs were. We opted against creating too many difficulties, descended to the penultimate belay and began the long and difficult descent, a dizzy, nigh 600m abseil into the night.

We reached our bivy at about 9, happy and relaxed we ate speck and cheese which seemed even tastier than usual and realised only then that we hadn't eaten anything since 5:30am. We weren't in a rush, so we talked out our countless projects, about routes we'd climbed, our families, these mountains, the super Americans who in their typical style as the masters of the world decided to ruin a piece of history, not caring a damn for those who dreamt about it, about who placed them, about the others, about those who wanted to climb the route...

We thought about Cesare Maestri who finds no peace with Cerro Torre, we thought about the warmth of our homes, about a hot shower, and so the next morning we descended. At Rifugio Casinei we met the first person (see photo) in three days... 3 friends, 3 days in the mountains, all to ourselves.