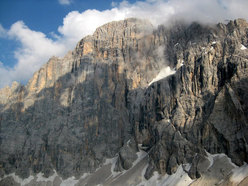 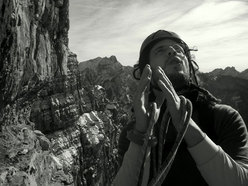 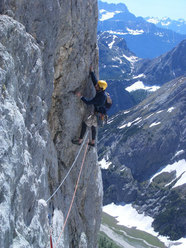 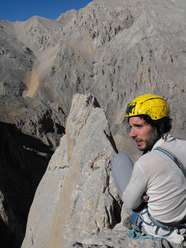 Via Casarotto on Cima Civetta solo

On Tuesday 30 August 2011 Italian alpinist Fabrizio della Rossa carried out what is believed to be the first solo ascent, and one of the rare repeats, of via Casarotto on Cima Civetta 3220m (Dolomites).

The grande NW Face of Civetta continues to fascinate. This time the fantastic folds of this immense wall captivated Fabrizio della Rossa, a man who in describing himself cuts things short (I've been climbing for about 10 years, am 26 years old, I've lived in Udine, then Trieste and my base now is Barcelona, while waiting for the winter season in Alto Adige). When talking about his love for climbing and alpinism though things change markedly. If you ask him to tell you about the route he's just climbed he first plays things down by stating "usually I never climb things that are important enough to be of interest, it's just that for me the importance of a particular route is connected to the emotions I felt, to the friends with which I climbed, to the things I learnt up there..." And then goes on to tell you about his latest climbs and the reasons why these have remained firmly impressed in his mind. For example, of the many routes climbed from the Dolomites all the way to Turkey, those first ascended by Massimo “Mox” Da Pozzo stand out: "Sognando l'aurora, Da Pozzo vecchio pazzo, Good bye 1999, Excuse moi... La va de qua, Compagni di merenda etc... they're all routes which always enchanted me due to the beauty of the climbing and also because I always managed to on-sight them, bar Da Pozzo Vecchio Pazzo which I redpointed..."

This long introduction to say that his solo ascent of the route established by Renato Casarotto and Giacomo Albiero from 16 – 16 September 1979, is one of those which, apart from the indubitable technical valor, is one which demands things from the heart. A bit because the route - which starts from the 'crystal', that perennial snowfield right in the centre of the NW Face which can only be reached by climbing the first half of Via Solleder – had only had a handful of repeats. And a bit because the 'solo' came about by chance. And also, last but not least, because the climb is reminiscent of that great alpinism which Renato Casarotto carried out. Once again we feel it's worth underlining that the massive rock faces always hold some (great) surprises and novelties in store for those on the lookout. Just like the 'Casarotto' on Cima Civetta: a lovely flower to be picked or, in the words of Fabrizio Della Rossa, a route which is "incredibly inspired... and those who know how to deserve her will return home with a secret journey up through the massive folds on the rock face."

Semi-serious technical details...
What can be said about a route which no one cares much about (try searching for it on google) which has perhaps only a handful of repeats, which even the guidebook cuts short with a rough sketch and less than two sentences? What can I say, when even I wanted to climb the Solleder but I repeated in error? Right, now that I've let my important short coming out of the bag, I believe that the Via Casarotto is an incredibly inspired route and those who know how to deserve her will return home with a secret journey up through the massive folds on the rock face. The route follows the Solleder to the suspended snow field and then breaches out via a series of cracks and corners which the guidebook photo guesses is the large seeping crack, easily visible with the naked eye from Rifugio Tissi.

What I'd like to do now is provide some more information which tempts readers to embrace the NW Face via this route. But the description which I can give is as approximate as that of a goblin asked to talk about his forest. He'd reply with an amazed, astonished smile and before you know it he'd disappear by climbing swiftly up the branches of his trees; this is what I did that day, instinct moving me through the meanders of a rock face which had never before seemed so familiar, absorbing indelible sensations and memories.

In any case, to get to the route you need to climb the grade II section up the snow slope, move decidedly right, bump into the wall with your nose and the traverse along the ledge until you can't walk any further. From here climb leftwards up the slightly leaning, somewhat undefined corner. There are no in-situ pegs here but if you're in the right corner you'll stumble across some gear a few pitches higher up. A good reference point is the yellow rood, this too is clearly visible from the Tissi hut, to the left of the wet-streak. The pitches up here are the most demanding ones, I climbed circa 20m to the right, past a hard section beneath the roof without pegs (small roof and traverse left) and then another difficult section with a peg (black overhang through good rock, avoiding the loose rock on the right). Continue upwards to join the large wet-streak circa 30m below where this narrows into chossy, overhanging and wet... Cross this (beneath the shower) and traverse rightwards towards the unknown (no pegs, the sensation you have is: where on earth am I going to end up?) Turn the corner and discover a new chimney crack which leads to the last hard section (good peg), from here whistle your way up to the summit!

A heartfelt thanks to my sponsors: Venturino del Torrani and his restorative grappa, Walter from Rifugio Tissi, all of Coldai, and especially to Enza: I can still taste that cake!

Even less serious notes about the solo...
When you live in a big city you're constantly surrounded by hundreds of people, you zoom around along the horizons of buildings, roads, concrete and lights, until you find yourself disoriented. You search for a margin of humanity in the midst of all this multitude, but soon you find yourself shoving and being shoved and you ask yourself "where the hell are all these people going?" So you end up hating and losing that humanity that you were originally searching for.

If you said you are all alone, nobody would believe you: you're throat is dry due to the chit chat and as soon as your hands begin to touch her side you forget everything and you convince yourself that it's all just a load of crap. The next day, however, you enter the subway. During that short journey between one station and the next time stands still, it's a place where solitude cries out from the mass of sitting and standing bodies. You look at your despair reflected in the faces of others, a mirror of your own. So go and flee, incapable of expaining how you remain lucid and serene beneath the wall. You whistle as you start to climb, feel free because the loneliness that oppressed you until just the day before now supports your weight, like an updraft it pushes you through the clouds.

At last you feel at ease, dance as if it's a waltz. You're alone, and around you there is no one to remind you of this. You think that now you know where you are, you can stop racing around and take your time, and in this time attempt to reach your soul, seeing that up here it can't escape elsewher. You may not achieve this, but when you're on top and smoking a cigarette, you feel happy. So much so that, back in the subway, you find yourself thinking about the next climb.